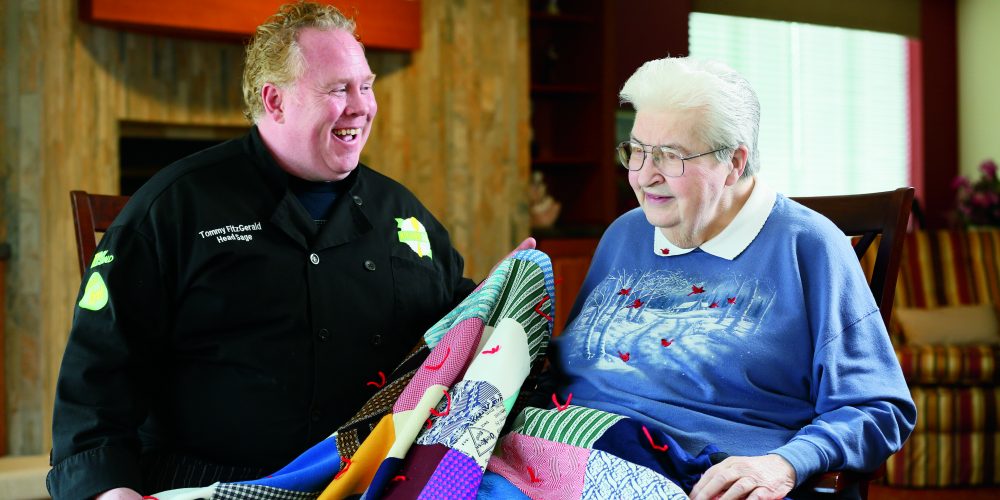 Photo Caption: Tommy FitzGerald was just four when he met Sister Judith Ann Barber. Here, they get reacquainted as Tommy shows her his quilt, made for him by the Dominican Sisters. The quilt was one of a set made for the beds of the FitzGerald family during the months they lived with the Sisters at Marywood after a fire destroyed their home.”

“I was standing on the street watching their house burn down. The fire was dreadful,” Judith Ann Barber, OP reminisced recently about October 9, 1974, when a home on Lakeside Drive NE, across from Marywood, belonging to Mike and Linda FitzGerald and their seven young children, was destroyed. “Mr. FitzGerald was out there with their children talking to another neighbor about not having anywhere to live now. I told him if they couldn’t find a place where they could all be together, I would check with the Prioress, Marjorie Vangsness, OP and see if they could live in one of the vacant spaces in our building.”

So began an act of mercy that continues to have a rippling impact on those most intimately affected – the children who found themselves sheltered by the Dominican Sisters.

“It definitely put a stamp on my spirit to recognize that we are one community, and we are here to bring each other up,” said Tommy FitzGerald, who was four years old at the time of the fire. “The Sisters were amazingly accommodating.”

Today, Tommy is founder and executive director of Kitchen Sage, a culinary leadership program working with young people from all backgrounds who seek to build life skills in a fun, food-centered atmosphere. “My commitment to hospitality as a career has to do with lessons learned when my family home burned down and we were taken in by the Dominican Sisters. Look what I do for a living, I’m here to take a young person and offer him or her opportunities,” Tommy said. “I learned from the best.”

Recalling the aftermath of the fire, Linda, mother to this brood of seven children, said: “They took us into their home. They included us. They didn’t have to invite us in. But they did. They welcomed us.”

Linda was out of town for an uncle’s funeral the day of the fire. She recalled hearing Mike say over the phone that the fire took everything. She was devastated, thinking that meant all of her children. Once Mike could clarify that the children were all safe, Linda was able to focus on the immediate task at hand – finding shelter for a family of nine.

“It is so hard to put into words. It wasn’t just that they gave us a home. They gave us spiritual guidance and, most of all, love,” Linda shared. “It was such a special time in our lives; we had nothing and the Sisters offered us mercy and hope.”

Sister Judith Ann remembers that people thought it was very unusual for the Congregation to host a family with children ranging in age from 3 to 12 within the walls of the Dominican Sisters’ Motherhouse. “At the time it seemed like the natural thing to do. Here were the neighbors of whom Jesus speaks. We had the space; it would have been cruel to say no, you can’t come in,” she said.

With the help of Linda Schoenborn, OP, then Executive Housekeeper and Hostess for the Motherhouse, the family was settled into the room now known as Ratisbon Dining Hall. Tommy remembers the seven single beds lined up along the wall with pipe and drape to form a dormitory for the children. His parents had two single beds pushed together at the end of the same large room. A small area was set up for homework and meals. The family shared a bathroom but had to travel to the lower level to use what was at that time the postulant shower room.

“Ratisbon was not being used and we went into our attic and found enough beds and dressers for them to use, even a table and chairs,” Sister Linda said.

Tommy’s mom, Linda, shared that she was surprised and pleased to see that each child’s bed was covered by a hand-stitched quilt crafted by one of the Sisters and each child received a rosary made by one of the Sisters. Tommy noted with teasing laughter that he is the only one of his siblings who still has his quilt. For him, it has become a symbol of treasured memories. “The Sisters showed us love before we even got there by making everything ready to go,” Linda said. “The children thought it was great. To them it was home.”

“I never felt that we were homeless. We were never without hope,” Tommy said. “Because of the way the Sisters treated us all, we never lost our dignity. I never felt like we were poor. I just wanted to live there forever.”

Tommy is full of stories from his five months of life at Marywood. He recalls some of the Sisters baby-sitting them; the family simply walking upstairs to Sunday Mass; trick or treating through the convent, knocking on doors and being rewarded with treats from the Sisters; sharing Christmas services and a meal with the Sisters; and sledding with some of the Sisters on the property.

Even today the Dominican Sisters support sheltering the homeless through their collaboration with the Grand Rapids Coalition to End Homelessness and the Congregational Partnership Program.

In the past decade, the Congregation has also opened other Marywood spaces, welcoming people to the Sisters’ home through long-term care at Aquinata Hall and rehabilitative care at Marywood Health Center. “We invite people in all the time,” Sister Judith Ann said.

“The Dominican Sisters, what they’ve done for our community and for my family is amazing. It’s all about that spirit of glorifying God through our actions for our neighbors,” Tommy said. “Nothing has changed here; the buildings look different, but the Dominican Sisters are doing exactly what God tells everybody to do.”