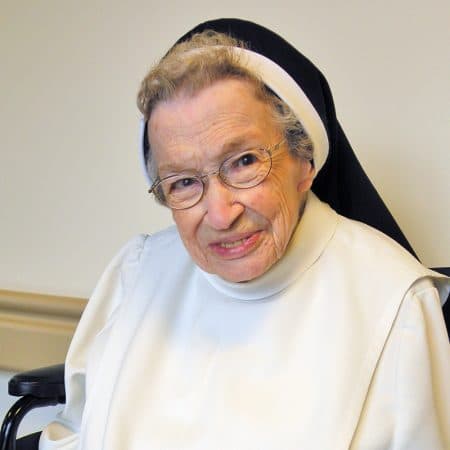 “We are all just walking each other home.” Ram Dass

Born on April 22, 1917, Louise Anna Sagorski was the eighth and last child of William and Albina (Rogalewski) Sagorski of Sand Lake, Michigan. She was baptized May 13, 1917 at St. Mary’s Parish, and as a youngster attended the local public school as there was no Catholic school in the little town. Religious education was provided by the pastor who gathered all of his parishioners of every age to learn about their faith on Sunday evenings. Their small farm supported the rather large family of seven daughters and one son. Surrounded by a loving family, garden of fresh foods and homecooked meals, Louise grew strong in body and spirit with a zest for life that sustained her for over 103 years.

Louise met Dominican Sisters on occasion when Sisters came to Sand Lake on home visits or during the summer for brief religious education opportunities. When she was a young teenager, two Dominican Sisters visited the parish for the purpose of encouraging vocations. From these intermittent encounters young Louise determined to become a Sister and entered Marywood Academy as an Aspirant (girl seeking to become a Sister) when she was fourteen. Graduating from Marywood Academy in June of 1934, she entered the community that December, and the next fall received the habit and her new name in religion – Sister Rose Seraphine of the Sacred Heart. Along with her classmates she took temporary vows two years later and soon began what would be a 40-year career in teaching young children.

Sister Rose Seraphine received a BA from Aquinas College and an MA from the Aquinas Institute of Religious Studies. She also earned permanent teaching certificates from the Michigan and New Mexico Departments of Education as well as a Hospital Aide Certificate from the Albuquerque Technical Vocational Institute in New Mexico.

Her older sister, who also entered the congregation and was known as Sister Albert, had volunteered to teach in New Mexico. Sr. Albert’s letters home were filled with enthusiasm for the people, the land, and the culture. Soon her younger sister began to yearn for the adventure of traveling to the Southwest to teach.

Eventually that dream came true and Sister Rose Seraphine was assigned to go to New Mexico where she taught children in the primary grades at Our Lady of Belen, St. Francis School; San Juan Pueblo and the Nativity of the Blessed Virgin. She loved the children and the land and held these years close to her heart.

Although Sister Rose Seraphine enjoyed teaching, she also felt called to care for those needing assistance in the medical arena. Having earned a diploma for work as a nurse’s aide, she began assisting at Aquinata Hall, the House of Studies and Marywood where she helped senior Sisters with their activities of daily living. She also did home health care at St. Stephen’s Parish and, for a brief time, she cared for a family member who had become incapacitated.

Known throughout the community for her exquisite calligraphy, it was not surprising that she was soon assisting in the graphic arts area. Her next assignment was to assist Sister Mary Ann Cudzanowski in the mailroom. Here too she had the opportunity to apply her skills in design and calligraphy.

She once mused, “There are so many things I like to do, I can’t figure out what I’m going to do when I retire.” Teaching, nursing, calligraphy, artistic endeavors, outreach to the community, volunteering in the mailroom – Sister Rose Seraphine was a dynamo of energy and competence.

As her life neared its long and fruitful end, Sister Rose Seraphine was known for her sharp mental abilities. Doing math problems and word searches were among her favorite activities. She liked to fold the clothing protectors used for dining and enjoyed teasing the staff whenever she could. She was known for her animated and playful participation in whatever was going on, especially music. She loved one particular song and made sure everyone on her floor knew the words. That song was “Show me the way to go home.” And so, she has shown us the way, and now she is “home” rejoicing with all of her family and friends in the vast communion of saints who never really leave us. She was always good company on the journey home and will be missed.

Sister Rose Seraphine is survived by nieces, nephews; grandnieces and nephews; many friends and members of her Dominican Community.

We commend Sister Rose Seraphine to your prayers.

Pray for Holy Father and all religious

Sr Rose Seraphine Sagorski with her class in New Mexico.

“…Sisters of “Nunsense” were based on Dominican Sisters who taught me up in Alma, Michigan. Our Mother Superior was Sister Vincent DePaul. It doesn’t seem that long ago that we came to Marywood to film the opening sequences of the A&E Television Special of “Nunsence” featuring 52 Dominican Sisters dressed in the habits. Sister Rose Seraphine played her delightful, mighty feisty self.” – Dan Goggin

in June 2015, Sr. Rose Seraphine Sagorski had a surprise visitor, Dan Goggin, writer and creator of Nunsense. Sr. Rose and the Grand Rapids Dominican Sisters participated in Nunsense during its run in Grand Rapids, Michigan. Dan and Sr. Rose shared a treasured friendship over the years.

She assisted in the mail room at Marywood for a number of years. Catching Up: Celebrating 2020 Jubilarians Together