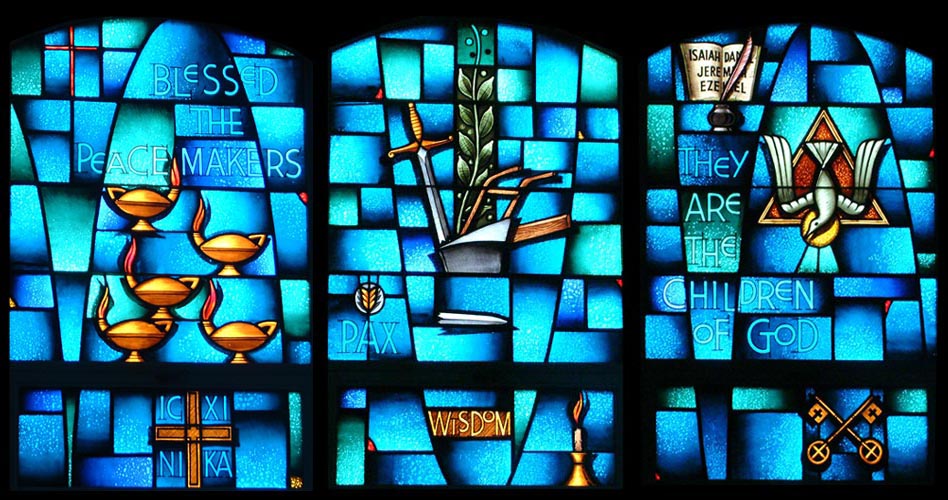 I’m always a little annoyed by the internet memes that appear on this feast that show a huge crowd of canonized saints who already have their propaganda machines and feast days. Today is not for them. Today is the feast of all those anonymous, unnoticed, people next door saints who, by their lives of compassion, sacrifice, service, by their living of the Beatitudes, made the world radiant with their holiness.

I suspect most of us were taught in preparation for our first confessions to examine our consciences on the ten commandments. The average 7 year old would not find that a very high bar -their lives not characterized by idolatries, adulteries and murders. Imagine how different our lives would have been if we had been taught to examine our consciences on the Beatitudes, the very high bar of holiness to which Jesus calls us. Let’s reflect for a few moments on that way of holiness Jesus proposes to us.

The word Jesus uses in the Beatitudes, which we translate as “blessed,”-the Greek word makarios -had a very specific meaning. In the religion of the Roman Empire, the term for heaven was “the fortunate islands” the word for fortunate being makarios. The idea was that the fortunate islands were a place of diffused bliss, perpetual chill, where you are not moved by any strong emotion, either positive or negative. How like the gods when you are above it all and not moved by any strong passions for good or for ill.

1. How godlike are the poor in spirit: Luke’s beatitude simply calls the poor blessed. Matthew adds “poor in spirit”-the problem is not in things but in the spirit of grasping that we bring to them. You may have heard the response to the question, “How much money is enough?” made by billionaire Howard Hughes: “Just a little more.” How like God are we when we are liberated from our addiction to grasping and acquisition. A friar once went to Francis of Assisi with what must have seemed like a harmless, pious request. He wanted a psalter, a book of psalms, and Francis told him no. Francis said, “This is how it begins. First you want a psalter. Then you will want a breviary. Then you will want a locked box into which you can secure your breviary. Then you will want a brother to whom you can say, ‘Brother, go fetch my breviary.’ And it will end with you wanting a sword with which you can kill to defend your breviary.” Francis deftly unmasks capitalism – a system of unlimited grasping that inevitably ends in violence.

Even more dangerous than the things we grasp is the sense of self that we grasp on to and have to defend at any cost. There’s a story in the life of one of the patrons of the Hartford Catholic Worker, St. Martin de Porres. Martin and another Dominican were walking a street of Lima and saw coming toward them a priest who had the reputation of loving the comfortable life. His fine silk cassock was stretched by his impressive gut; sign of never having missed a meal. The brother with Martin began to criticize the priest for his scandalous laxity and Martin said, “Stop! Don’t say that. He may be able to attract to God people who would be repelled and discouraged by our austerity.” Martin was truly poor in spirit. He didn’t even grasp on his sense of self. His holiness was not a stick that he used to beat other people up.

2. How godlike are those who mourn. Jesus does not refer here to the natural sorrow people feel when they lose a loved one. He is referring to a specific group of people in the religion of his day called “the mourners in Israel.” They were people who so longed for the coming of the Messiah that their whole life is ordered around that longing. Nothing will satisfy them until the reign of God’s justice and peace comes in its fulness.

I had the privilege of visiting Israel a number of years ago. There’s a village in Galilee called Safed that is a center of the Jewish mystical tradition. You will notice that on the main street of Safed there runs an iron railing across the buildings to the crossroads. There was a woman there who was a mourner in Israel and believed firmly in the tradition that the Messiah would stop in Safed on his way south to Jerusalem. She would walk from her house to the crossroad every day of her life with two cups of tea, one for her and one to refresh the Messiah on the day he arrives. When she got old and unsteady, the town put up the railing so she could keep her daily vigil at the crossroad. It is of people like that that Jesus was referring when he said, “how godlike are the mourners.” These are people whose emotions are proportioned to reality. What advances the reign of God delights them; what hinders the reign of God breaks their hearts. And how rare those people are. We are barely aware that 1/3rd of Pakistan is now covered with water. But God help the person who edges into a parking space that we had our eye on!

3. How godlike are meek. The only other time the word meek appears in Matthew is when Jesus uses it to describe his own heart, “I am meek and humble of heart.” Meekness is the preeminent characteristic of the heart of God, the characteristic of the heart of Jesus. God is not self-assertive – you can believe in God or not. God simply offers God’s self and longs for a response. How godlike are we when we give of ourselves without measuring, without expectation, without calculating cost or return.

5. How godlike are the merciful. The Hebrew word for mercy is rechem which literally means “the love of the womb” How godlike are you Jesus says when the core of your being, your womb, your gut, your center is mercy; when your being is a protective vessel in which life is conceived, nourished and pushed forth into the world. Womb-love. The Japanese Zen master of the 12th century Dōgen used to say that the whole purpose of meditation is to develop “a grandmother-heart.” It’s said that all kids have the worst parents and the best grandparents. Grandparents are known for indulgence, for kicking the rules to the curb, for unconditional and lavish affection. That is womb-love and how godlike we are when we know it.

The greatest problem with being harsh and demanding and merciless is that it makes you incapable of believing that mercy can be shown to you. With mercy, the measure with which we measure will be measure back to us.

6. How godlike are the pure in heart. Jesus refers here not to puritanical propriety but single heartedness, being authentic through and through; being transparent from our depths to our skin. The pure in heart live without self-defensive masks. The psychologist Carl Jung said that people who put a lot of energy into maintaining a mask, pay the price in irritability. Think of the people who can really push your buttons. They are gifts from God because they reveal to us where the impurities of our hearts, where our masks are.

In the classic words of the peacemaker Daniel Berrigan:

We have assumed the name of peacemakers, but we have been, by and large, unwillingly to pay any significant price. And because we want the peace with half a heart and half a life and will, the war, of course, continues. War, by its nature, is total-but the waging of peace, by our own cowardice, is partial….
“Of course, let us have the peace,” we cry, “but at the same time let us have our normalcy, let us lose nothing, let our lives stand intact, let us know neither prison nor ill repute nor disruption of lives.”
There is no peace because the making of peace is at least as costly as the making of war–at least as exigent, at least as disruptive, at least as liable to bring disgrace and prison and death in its wake.

I think of the words of another great peacemaker Sister Ardeth Platte, “I will never allow another human being to be my enemy.” What a way of holiness that is! You can feel toward me whatever you want. You can even inflict pain on me. But I will never allow you to change the way I see you and the way I see myself – as the beloved children of God.

I began with a story about one of the patrons of the Hartford Catholic Worker – St. Martin de Porres. I’ll conclude with a story about another, St. Brigid of Kildare. It was the custom in Brigid’s monastery for the nuns each year on Pentecost to choose by lot one of the Beatitudes which was then supposed to form the focus of their prayer and action for that year. Every year of her life Brigid drew by lot the same Beatitude, “Blessed are the peacemakers.”
May that Beatitude be a life program for each of us. May the intercession of All Saints enable us to take every day one more halting step on the path of peace.

Thank you to Fr. Terrence Moran and the Hartford Catholic Worker. “A lay community of Catholics and like minded friends, living in the north end of Hartford, working and praying for an end to violence and poverty. We are a 501c3 tax exempt organization. We do not seek or accept state or federal funding. Our ability to house the homeless, feed the hungry, and work with the children depends on contributions from you.”