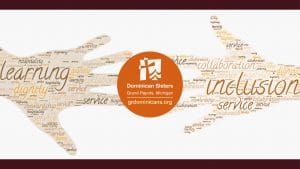 Rabbi Arthur Waskow of The Shalom Center writes: ” Dear friends, I have kept writing and saying that “we” as the human species and “we” as the American people are facing a profound choice – between going backward under the control of Pharaoh’s army or forward into the Unknown of the Red Sea. And I believe that the survival of democracy in America and the survival of humanity on the planet are deeply intertwined. The choices are so big and so urgent that they go beyond electoral politics into profound issues of society, culture, religion, and spirituality. Yet they include crucial choices in electoral politics, which did not end in 2020. Indeed, even elections and who votes in them are shaped by deep spirituality.”

Over time “pharaoh’s army” has seduced us with promises of security and fearful threats. There have been many forms of such deceptions. Today, in our country, we are faced with the seduction of controlling our privilege by depriving persons who would challenge that privilege. Today that seduction and challenge is occurring at the voting booth.

How is Voting Being Restricted?

Will this Movement Effect Any of Us?

If passed the Governor will veto the measures. A citizens’ ballot initiative can then be pursued and, if successful, the Legislature can approve the initiative but the Governor cannot veto the same.

To What Should We, as Voters, Be Attentive To?

For the People Act (H.R. 1/S.1) considered the greatest civil rights bill since the civil rights movement itself and has sent it to the Senate by the House (3/11/21). This bill addresses voter access, election integrity, election security, political spending, and ethics for the three branches of government.

Federal voting rights legislation now moving through Congress would override many of the state-level restrictions described above.

On the positive side, 47 states have introduced 843 bills with expansive provisions: 1/3 address absentee voting; 1/5 seek to ease voter registration; expand access to early voting; and restore voting rights to people with past convictions.

On the negative side, some state lawmakers are responding by introducing nonbinding resolutions to oppose this federal law if it is enacted.

Where Can I Find More Information?

For more information about the state voter-suppression bills being passed, check https://demcastusa.com/2021/04/08/jim-crow-voting-laws-then-and-now/

For more information about the “For the People” bill now before the Senate, check the Brennan Center for Justice at https://www.brennancenter.org/our-work/analysis-opinion/people-act-americas-next-great-civil-rights-bill

This content, authored by Joan Williams OP was developed and shared by the Inclusion Committee of the Dominican Sisters ~ Grand Rapids.