We Celebrate Peace… and Commit to the Work Yet to Come 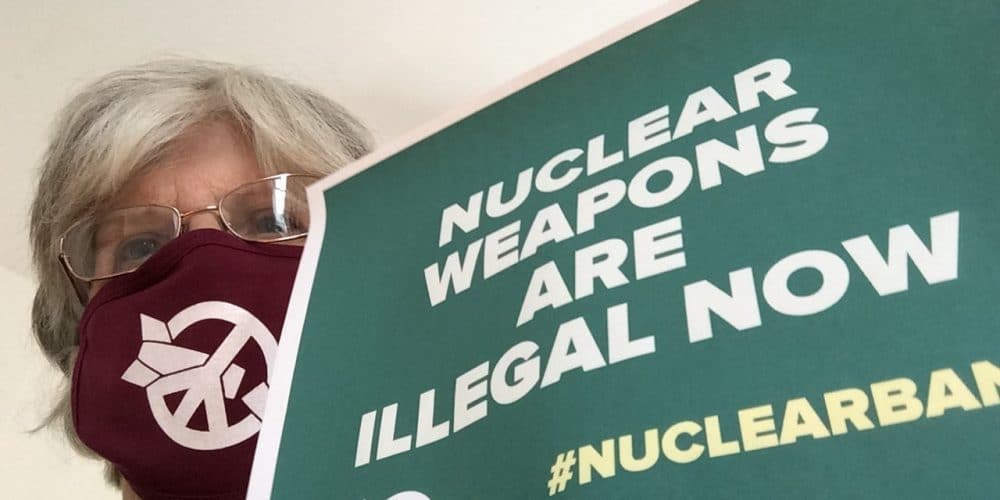 by Carol Gilbert, OP with ICAN

How inspired and inspiring were the messages of unity coming from the steps of the United States Capitol in Washington D.C. this week!

Did you know that the 59th Inaugural National Prayer Service on Thursday featured two vowed women religious? Sr. Carol Keehan helped get the Affordable Care Act passed under the Obama Administration; and Sr. Norma Pimentel is the director of Catholic Charities of the Rio Grande Valley and has been working among immigrants at the border in Texas.

We are one step closer to the elimination of nuclear weapons as the Treaty on the Prohibition of Nuclear Weapons (TPNW) is entered into force on January 22, 2021. We always knew nuclear weapons were immoral and now they are illegal under international law.

This is such a powerful moment in the work that Sr. Ardeth Platte OP and I have been involved in: raising awareness about the devastating human cost of nuclear warfare, and the outrageous economic machine that supports nuclear weapons in our world.

We join with two thirds of the world as we celebrate the treaty’s Entry Into Force.

While the United States hasn’t supported this Treaty, voices from around the world are sending a reminder that they are watching and waiting –no longer so patiently — to see action.

The USA has been obligated under an earlier Treaty on the Nonproliferation of Nuclear Weapons since 1970, along with four other countries (England, France, China, Russia), to pursue nuclear disarmament “in good faith” “at an early date”. This new Treaty on the Prohibition of Nuclear Weapons is an expression of the impatience of non-nuclear states with the failure of states who signed the original treaty to meet their obligation to disarm.

With the Entry into Force of this new treaty (TPNW), nuclear weapons will now be in the same category as land mines, cluster munitions, chemical and biological weapons, and poison gas: all illegal.

It’s also important to note that according to Article 6 of the U.S. Constitution, international treaties to which the U.S. is a signatory are the ‘Supreme Law of the Land’ and supersede state laws. Our country, the United States, made a commitment to stop the build-up of nuclear weapons in 1970; more than 30 years later, the economic machine that manufactures and sells nuclear arms, continues to disregard the wishes of a majority of nations around the world.

All of the efforts led by International Campaign to Abolish Nuclear Weapons ICAN and the United Nations — and the individual voices who support this international initiative — have been focused on promoting peace and justice, on unveiling Truths that some would wish would remain hidden.

We look with hope to the day when the USA will lay down its weapons and do its part for world peace. We also stand ready and committed to make sure that day arrives.

The Dominican Sisters ~ Grand Rapids, in 2007, passed a Corporate Stance for the abolition of nuclear weapons. At the time when the United Nations was considering the Treaty on the Prohibition of Nuclear Weapons, letters were sent to Ambassador Haley, President Trump, and Representative Rand Paul urging them to endorse the treaty. On July 24, 2020, we signed on to a letter sponsored by Setsuko Thurlow, a hibakusha (a survivor) from Hiroshima, sent to the leaders of 197 countries asking them to ratify and promote the Treaty on the Prohibition of Nuclear Weapons. Our ministry of peace continues.” ~ Promoter of Justice Sr. Brigid Clingman.