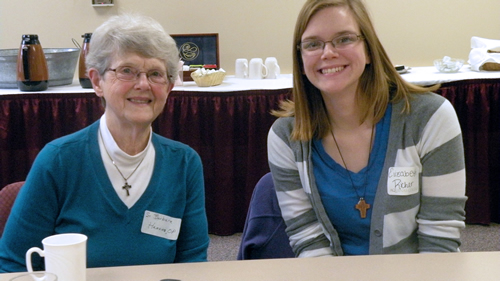 In talking with Sister Barbara, I learned that growing up she had never thought about joining a convent. In fact, until her boyfriend, Dale, said something to her it was not a consideration.

In her interview she tells the story of the afternoon becoming a sister became a consideration for her. She and Dale were sitting outside their parish before Stations of the Cross, and the sisters were beginning to walk two-by-two down the sidewalk towards the church. Dale turned to Sister Barbara and said that he was not going to be able to marry her because she was going to become “one of those.”

I found this very interesting because, as Sister Barbara continued on in her story, she shared that she had planned on going to the convent for 10 days and then leaving and going to nursing school. She seemed so sure that this was what was going to happen. I found this somewhat amusing because it just goes to show that God’s plan does not take our own plan into consideration.

As Sister Barbara shared about her life after making her final vows, I became enthralled with the community aspect of religious life. I love the idea of daily communal prayer. Even though she does not live at the mother house, Sister Barbra is able to join with her roommate every day to pray morning and evening prayer. The community also has a great focus on learning — study being one of their charisms — so many of their community events involve bringing in speakers and such to delve into different issues. I look at Sister Barbara herself as a perpetual student. She continues to take on new tasks that require her to learn new things and push or challenge herself. I greatly admire that about her.

One of Sister Barbara’s greatest passions is social justice. She has witnessed and been a part of many experiences that have dealt with human rights and quality. Currently she is helping her entire community go through training and certification to build a racism-free community. She has also worked with the Grand Rapids Community Media Center, where she worked on two programs that focused on local non-profit organizations. Her work through the media center exposed our local community to all of the wonderful work that is going on around us. Through this, she also united non-profits that were approaching the same fundamental issue from different avenues. I think this is wonderful because when organizations are able to work together their outreach and ministry can be greatly enhanced. I am in great admiration of all of the work she has done and hope to someday be as involved in my community as she is.

Written by: Elizabeth Richer is a senior at Aquinas College in Grand Rapids, Michigan. She is majoring in Elementary Education, with minors in mathematics, Language Arts, and Catholic Studies; she hopes to teach middle school after graduation. She is eager to take the journey of SisterStories because of her love for relational ministry and her desire to learn more about the different paths of faith each person walks in their journey.

Other Stories by Elizabeth Richer with Sister Barbara Hansen, OP.

Her boyfriend predicted the convent

‘I have learned that stories unite us’

SisterStory: Her Boyfriend Predicted the Convent