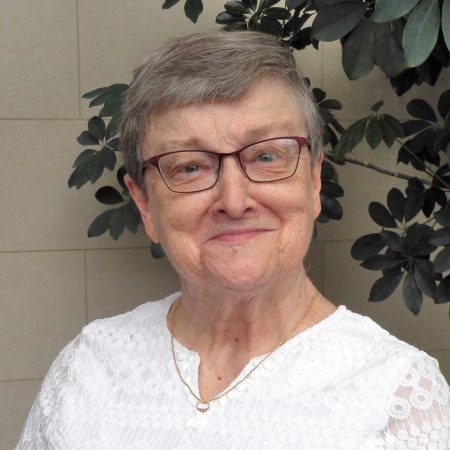 The happiest time in my life was the time I spent as the Director of the Grandville Neighborhood library. During Sister Joan’s 60th Jubilee year, she shared this story.

In the mid-1990s, a man donated his house across from Hall school to the Grandville Avenue neighborhood association. In 1995, the association decided to turn it into a library because at the time no library existed for children in that neighborhood.

Sr. Joan volunteered to be the director of the new library and this was the Congregation’s donation to that initiative since it was an unpaid position. It was the most wonderful experience of her life. She was the first director (and librarian) and was able to purchase the books and materials that would go into the library. She called the library a “beacon of hope” because at the time there really was no place for the children to go to read and work quietly, do research, and get homework help.

On the first day the library opened, the first person to come to the library was at little boy who was in 4th grade. Sr. Joan greeted him: “Welcome to your library. What can I do for you? My name is Sr. Joan and I’m your Librarian.” He came up to Sr. Joan and said, “I want a library card.” She asked “what is your name?” He said, “Jesus Delacruz.” Sr. Joan replied, “Do you know what your name means? It means Jesus of the Cross.” He just looked at her and said “I still want a library card.” Sr. Joan thought that was so funny. So she made him a library card and found out he lived right next door to the library with his mother and siblings. And Jesus came to the library every day after that for the next six years.

Sr. Joan would tell the children who came to the library: you can change your life if you want to. You need to graduate, you need to go to high school, you need to go to college. For some it was beyond their imagination. During the six years she was at the library, Sr. Joan saw many of “her kids” go from grade school to high school to college, including Jesus.
Sr. Joan helped find tuition assistance for both Jesus and his siblings to attend St. Andrew’s school and then for Catholic Central. Sr. Joan also took Jesus to events in town – to the zoo, to museums, anywhere there was something going on just to give him a chance to see the world outside of his neighborhood once in a while.

On the day Jesus graduated from Catholic Central, Sr. Joan picked up Jesus’ mother to bring her to the cathedral for the graduation. When Jesus walked down the aisle in procession, Sr. Joan said that his mother looked at her as if to say “That is my boy.” After the graduates recessed, Jesus’ mother put her arms around Sr. Joan and his mother started to cry.

Jesus went on to Ferris State and he’s graduating this year. It took him a little longer, but he needed to support his family and work for his tuition. He works part time through the year, works as a camp counselor during the summer and he’s a volunteer soccer coach for young children.

A couple of years ago, Sr. Joan asked him what he was going to do after he graduated and he said he didn’t know. She said, “I know what you’re going to do – you’re going to be a teacher.” And Jesus asked how she knew that. She told him it was because of how well he did helping the children at the library so many years ago.

Since that time, Jesus pursued a degree in education and he spent a year teaching at Westwood. Sr. Joan wondered how on earth he fared teaching at such a rough school and he said “they listen to me. They respect me because I respect them.” Sr. Joan said – that’s so wonderful – where did you learn that? And Jesus said, “I learned it from you – you respected every child that walked into the library no matter how bad we were being.” Sr. Joan recalled that if the kids were acting out she would say to them, “Your behavior isn’t suitable for the library so I think you need to go home. But you are welcome back here tomorrow.” She guessed that was what he meant about respecting the children. She didn’t kick them out and say they couldn’t come back.

Jesus still goes to the library (which is now the Peter Cook Library on Grandville Ave) and volunteers his time. He will also be a middle school teacher. He comes to visit Sr. Joan about once a month.

Sr. Joan said that she believed God sent Jesus to her. She thinks of him as her boy.  “Jesus is the one who showed me that if each one of us can just help change one child’s life we can change the world.”

Pray for children and students

Reading earlier in her ministries. Sister Joan Pichette, A Boy, and a Library Card