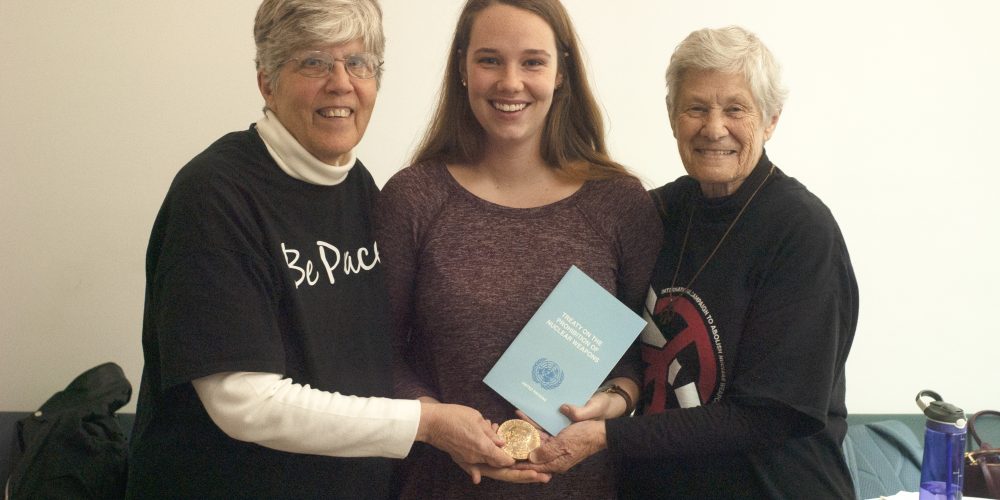 Since Friday, Oct. 26, Ardeth Platte, OP and Carol Gilbert, OP have been circulating in Hampton Roads, a conglomerate of seven cities in Virginia. On the morning of Tuesday, Oct. 30, they helped distribute food to people who are homeless. In the afternoon, they spoke to 5th – 12th graders at Virginia Beach Quaker Friends School. Monday night, they spoke at a Mennonite Church and were invited back for a peace vigil Tuesday night.

They continue their ICAN mission to raise awareness in the United States about the Treaty on the Prohibition of Nuclear Weapons.

The message of peace and unity that these two peace-preaching Sisters share is that each person who carries a message of peace into the world is part of the International Campaign to Abolish Nuclear Weapons (ICAN). ICAN received the Nobel Peace Prize for its work to draw attention to the catastrophic humanitarian consequences of any use of nuclear weapons and for its ground-breaking efforts to achieve a treaty-based prohibition of such weapons.

On this tour of cities, our Sisters have had the privilege of carrying the Nobel Peace Prize, a very special symbol of global unity and hope. The prize has been traveling all over the world, carried by members of ICAN, who are speaking in parliamentary settings, corporations, military bases, schools, and community centers.

Sisters Ardeth and Carol use the Nobel award to raise awareness among younger generations about the power of the global community. They introduce the purpose of the United Nations and the work of the ICAN. In their presentations, they encourage students to carry the baton of activism against war, against nuclear proliferation, against climate destruction, and more.

They are overjoyed by the responses to their peace preaching ministry. “It’s amazing when the young people, during our school visits, touch the Nobel Peace Prize. Many state out loud their commitment to peace and a world without war,” says Sr. Ardeth.

While in Virginia, the Sisters have also hand-delivered copies of the Treaty on the Prohibition of Nuclear Weapons, which includes a list of the countries who support abolishing nuclear weapons. The United States is not on this list, a critical message the Sisters share everywhere they go.

One of their deliveries was to the naval base in Norfolk, Virginia, headquarters of the Atlantic Submarine Fleet which is in charge of the Trident fleet of nuclear submarines. Here the submarines are repaired and maintained before returning to secret locations in the Atlantic and Pacific Oceans. They also delivered Treaty copies and messages to: Lockheed Martin and Northrup Grumman in Suffolk, NY, and Newport News Shipbuilding, charged with constructing 25% of each Columbia class ballistic missile submarine that will replace the Tridents.

During the previous week in New York, Sisters Ardeth and Carol were at Pace University to speak with college students about peace in the world and activism, and civic engagement and responsibility. For three more days in New York, large groups of students from four different high schools were bused to a New York-area YMCA to hear the peace message.

“Pace College and one of the high schools are establishing student ICAN groups,” shares Sr. Carol.

Empowered by The Word, the preaching and teaching peace continues.

A Personal Note from Srs. Ardeth and Carol

We want to share our last couple special weeks with you who support, encourage, pray and walk with us!
We began in New York City invited by Dr. Emily Welty and Dr. Matt Bolton to teach classes on the Treaty to Ban Nuclear Weapons at Pace University. Emily had the Nobel Peace Prize for four days, so we were all able to recommit ourselves along with students. The next three days we taught numerous classes of public high school students at a YWCA in Brooklyn organized by Robert Croonquist and his wonderful team.There we provided discussion regarding the Prison Industrial Complex, Military Industrial Complex, Political Prisoners and Ban Treaty with Real Voices of Orange is the New Black. High school and University students have committed to developing an ICAN (International Campaign to Abolish Nuclear Weapons) group in their schools…an amazing time!

We then traveled by bus through the night by invitation of Kim and Steve of the Norfolk Catholic Worker house. We delivered the Treaty to Corporations ( Naval Base Shipyard, Newport News Shipbuilding), Churches (Faith Deliverance Christian Center, Unitarian Universalist, Huntington Mennonite), Education Centers (Wesleyan University, VA Beach Friends School) and we vigiled at sites and had discussion with Just Faith, Pax Christi, Love and Gaelic Festival groups. One of the extra privileges was serving food to long lines of homeless and needy people.

The work at the United Nations is culminated in the picture below with the Nobel Peace Prize Medal which leads to a deeper and deeper commitment for us.

Our love and prayers for each of you, Ardeth and Carol