For the Dominican sisters in the dioceses of Detroit and Grand Rapids, Michigan, August 30, 1894 — the feast of St. Rose of Lima — proved to be a fateful day.

Grand Rapids Bishop Henry Joseph Richter chose that date to announce to the Dominicans in his diocese that henceforth they would be an independent congregation, separated from their “parent” congregation — the Dominican Sisters of the Most Holy Rosary, at Second Street, New York City. No longer would there be two provinces of the New York congregation in Michigan, one based in Traverse City and one in Adrian. Rather, one would be an independent congregation and the other would remain a province of the New York congregation. And, with Bishop Richter’s announcement, women who had been friends and served together suddenly found themselves in separate communities.

The announcement, while it seemed sudden to many of the sisters involved, had actually been several years in the making. The story begins in 1883, with Bishop Richter’s installation as the first bishop of the newly created Diocese of Grand Rapids.
From the chapter entitled Out of One, Two pg. 6, Golden Links 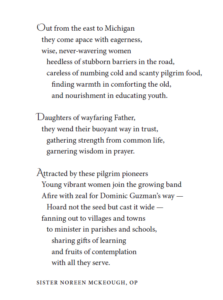 GOLDEN LINKS, The Shared History of the Dominican Sisters of Adrian and Grand Rapids, Michigan. 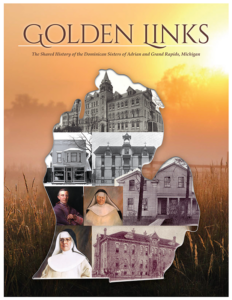 The poem by Noreen McKeough OP appears and captures images of the heart and courage of our Dominican pilgrim sisters.

Copies of this publication can be found in the Marywood Library.

The Preface of Golden Links

We were both aware of our early shared history as members of the Dominican Sisters of the Most Holy Rosary, missioned beginning in 1877 to the “inland island” of Michigan from our common motherhouse on the island of Manhattan, New York. Our presence in Michigan had expanded in response to the need such that by 1885 we were formed into a province of the New York congregation, named St. Joseph Province, based in Traverse City. Four years later, the provincialate was moved to Grand Rapids when our sisters opened an orphanage in that city at the request of the Bishop of Grand Rapids.

Our shared history began to diverge in 1892 when the New York congregation established a second Michigan province, also named St. Joseph Province, based in Adrian in the southeast part of the state. Two years later, on August 30, 1894, the shared history ended when the Bishop of Grand Rapids announced the separation of the Sisters of Grand Rapids from the New York congregation.

As in many legacy tales, there are differences in the story that is told, and those differences are often reflected in the interpretations of the facts behind them. We were inquisitive as to the history of our separation.

Now was the time to collaboratively review the source material and documents related to the separation that took place in 1894 and to tell this important story from our differing experiences. While the extensive research undertaken did not lead to any startling new discoveries of primary source material — record-keeping in the early days was not exactly, shall we say, robust — the goal was to explore the story with fresh eyes and essentially start with a blank page, bringing the two stories together into one narrative and attempting to resolve the discrepancies. We are deeply grateful to each of the individuals involved in the research and writing of this story (see p. 25) — with the added challenges posed by the COVID-19 pandemic — and to all who had a part in contributing to its layout, design and printing.

We hope you will appreciate the nuances and complexities of human relationships revealed in this narrative of common beginnings and then separation, a narrative that continues to hold some mystery and discrepancies among us. Life is seldom linear or one dimensional. By honoring the complexity of human relationships as both mystery and grace may we continue to unfold the story of our common and unique Dominican identities as it brings us together in new ways, with greater appreciation for sharing our future Dominican life.

Acknowledging the Efforts of Many 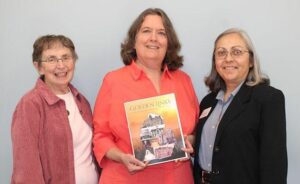 Special thanks go to… Sister Michael Ellen Carling of the Grand Rapids Dominican Sisters Archive, for reviewing the initial draft, providing a copy of her book, and freely sharing her own research.