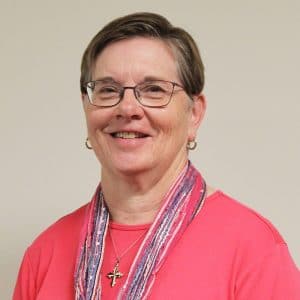 As president-elect, Sister Maureen will serve on the three-member leadership team for LCWR, along with Rebecca Ann Gemma, OP, and Jane Herb, IHM. The terms of this newly elected LCWR presidency team will begin at the conclusion of the National Assembly in St. Louis, Missouri in August 2022.

“We are delighted to announce that Sr. Maureen Geary has been elected as president-elect of the Leadership Conference of Women Religious (LCWR). LCWR is comprised of the elected leadership of Catholic Sisters, representing about 80 percent of the Sisters in the United States. Sister Maureen begins her service with LCWR at a time when women religious continue to respond to the signs of the times while focusing on the future of religious life in the United States and around the globe,” said Sr. Sandra Delgado, OP, prioress.

“With her background in accounting and law, higher education, diocesan justice ministry, 16 years in congregational leadership, and her ability to see the wider picture, ask critical questions, and think strategically, along with her pastoral and compassionate response and reflection to people and situations, Sister Maureen is well prepared to lead LCWR as it steps into the Mystery of the future and accompanies women religious into the next phase of mission and ministry.”

“I am humbled by the confidence of my Sisters in LCWR as together we carry on our call to preach the Gospel,” Sister Maureen said. “In this role of service to the membership of LCWR I affirm the conviction of our members that ‘we embrace our time as holy, our leadership as gift, and our challenges as blessing’”.

“Sister Maureen will continue her ministry as councilor and treasurer with our congregational leadership team while serving in the LCWR Presidency from 2022-2025. Our hearty congratulations and promise of prayers go with Sister Maureen as she embraces this new moment of service on behalf of women religious and the church!” said Sr. Sandra.