October: Invitation to Justice Action for Restoration of Asylum Protections 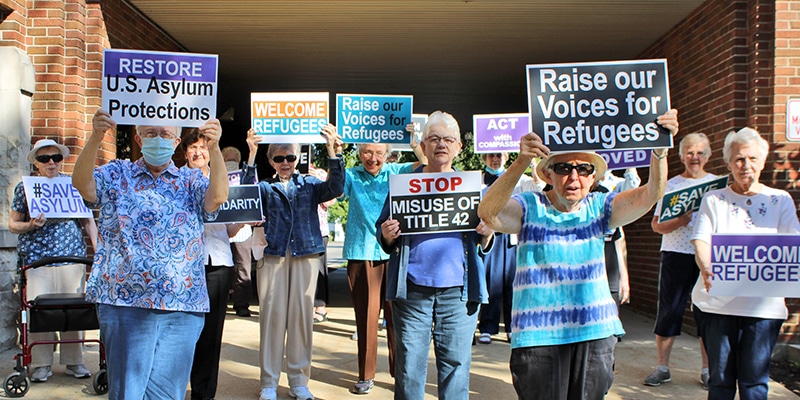 In early September, Catholic Sisters around the country received a letter from Sr. Tracey Horan, Sisters of Providence, (below) with an invitation to gather in Nogales, Arizona/Sonora to join a migrant-led protest to restore asylum protections for persons seeking asylum. In lieu of that possibility, congregations were asked to hold the refugees in a prayerful embrace each Friday of October.

Since that letter reached us, the crisis surrounding the Haitian refugees at our Southern border has confronted us. More than 14,000 migrants have been camping at the border and hoping to seek asylum in the U.S. Many of these persons had left Haiti after the 2010 earthquake for South America, hoping to find jobs and rebuild a life in countries like Chile and Brazil. Now these countries are experiencing severe economic turmoil, and jobs and acceptance have eluded the Haitian refugees. With the hope that it might be easier to cross into the United States under the Biden administration, they decided to make the trek north. But in recent days, the Biden administration has been deporting migrants by the planeload, sending thousands of people back to Haiti, a country that is in complete disarray.

We will also use this time to study – to better understand the root causes of these tragedies, to call on policy makers to respond with justice to the crisis, and to explore ways of being in solidarity with our sisters and brothers in our common home, Earth. Sister Tracey Horan submitted this letter of witness to the nature of the situation migrants face at the Nogales, Arizona/Sonora border between the United States and Mexico. Read Sr. Tracey’s letter below.

We are called to join the prayerful public witnesses across the country. To answer these calls we, Dominican Sisters ~ Grand Rapids, will gather each Friday at 4 pm in October at the edge of our campus/Fulton Street in Grand Rapids, Michigan to bear witness in solidarity for the restoration of asylum protections.

Associates and friends are invited to join us as weather permits. Sisters unable to come to the street can gather in the Marywood and/or the Aquinata Chapels. In case of inclement weather, the prayer will be in the Chapels. We regret that at this time only Sisters can be in our Chapels due to the risk of COVID.

I pray you are staying grounded and healthy. As I recently celebrated two years living and ministering here in Nogales, Arizona/Sonora, I reflected with gratitude on the many ways women religious in the US support migrants facing injustice, dehumanization and danger at the US-Mexico border: through prophetic ministries all along the border, lifting up migrant voices, channeling resources and volunteers when needed, providing hospitality, and standing in solidarity at marches and vigils in the US to decry the injustices migrants face at the border and beyond. I am grateful to be part of this ongoing legacy of prophetic solidarity.

As many of you know, conditions for migrants fleeing persecution and arriving at our southern border are getting worse. While many of us celebrated progress this spring with the end of the “Remain in Mexico” program, we learned this week (8/24/21) that the Supreme Court has forced a re-opening of the program, meaning migrants may be forced to wait out their asylum proceedings for months or years in dangerous border towns in Mexico. Although we were grateful when a tiny window opened for a very small percentage of highly vulnerable migrants to be paroled into the US in spring of 2021, that window has closed. At this time, there is no access to asylum at ports of entry, and we are gravely concerned that the Biden Administration has not shared any plans to move toward restoring asylum protections in the near future.

Instead, we lament that the Biden Administration has been moving further and further from the promise of asylum restoration through continued border closure to asylum seekers, expulsion of asylum seekers to southern Mexico and Guatemala, lateral expulsions designed to disorient, traumatize, and dissuade vulnerable migrants from accessing their legal protections, and the failure to address widely documented, pervasive CBP (Customs and Border Patrol) abuses against migrant families expelled through Title 42 expulsions.

To offer one example, I recently spoke with a woman staying at our shelter who has attempted to cross into the US through the desert five times to request asylum after she was threatened by organized crime groups in her home country and witnessed a friend nearly stabbed to death. Each time she crossed, she expressed to federal agents that she was fleeing threats and wanted to seek asylum. Each time she was denied and returned to Mexico. Her story is just one of many at the US-Mexico border who are daily being denied the protection afforded them by US and international law and suffering abuses during Title 42 expulsions.

As such, the Kino Border Initiative, in partnership with a number of faith groups and civil society organizations across the border and the US, and inspired by migrants organizing to #SaveAsylum in Nogales, Sonora, Mexico, has discerned that this is the moment to come together in solidarity in anticipation of the October 2 date to reconsider the border closure to migrants.

We know that it is crucial to build bridges between the US-Mexico border and the interior to foster education, awareness and action for migrant justice. We have seen how the voices and actions of women religious have proved a powerful force for building public momentum, as demonstrated during the Catholic Day of Action to reunite migrant children with their families in 2018.

We know that it is crucial to build bridges between the US-Mexico border and the interior to foster education, awareness and action for migrant justice. We have seen how the voices and actions of women religious have proved a powerful force for building public momentum, as demonstrated during the Catholic Day of Action to reunite migrant children with their families in 2018.

In this spirit, and on the eve of World Day of Migrants and Refugees, as designated by the Vatican, we invite Catholic sisters from throughout the US to consider traveling to Nogales, Arizona/Sonora to participate in a migrant-led protest to restore asylum protections on Saturday, September 25, 2PM PST, and to consider playing a public role in this action, which may involve accompanying and bearing witness to migrants who wish to be present at the port of entry to request asylum.

Thank you for all you do to continue to support migrants and refugees. As we look toward pathways to citizenship in the US and welcoming Afghanis, we know these are all pieces of one seamless garment of welcome.