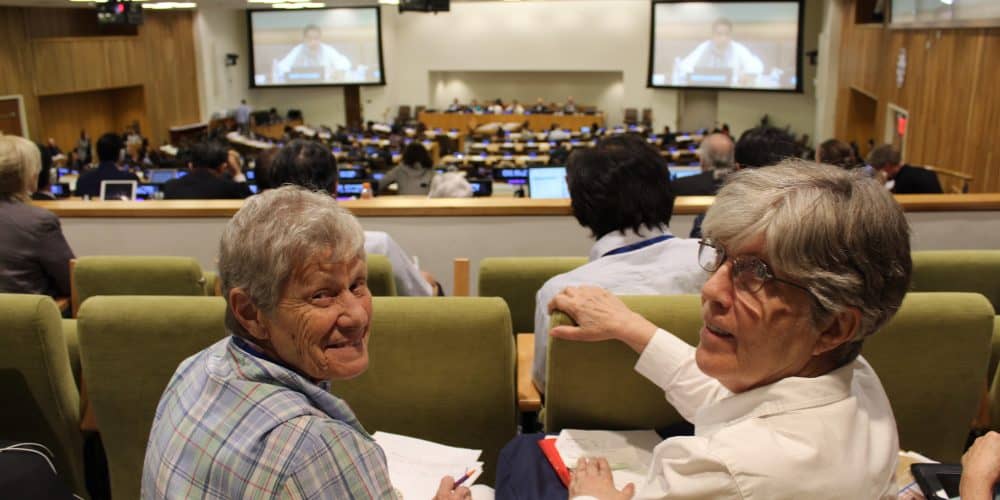 For months Sisters Ardeth Platte and Carol Gilbert have worked together with a coalition of partner organizations, representing one hundred countries-all as part of ICAN, the International Campaign to Abolish Nuclear Weapons.

On Friday– ICAN was awarded the Nobel Prize for Peace. ICAN received the 2017 Nobel Peace Prize in recognition of its role in achieving a historic nuclear weapon ban treaty and its work “to draw attention to the catastrophic humanitarian consequences of any use of nuclear weapons.” Uniting efforts with NGOs, victims, thought leaders and government leaders– multigenerational, ecumenical, and diverse across many spectrum– they have endeavored to unveil, name, and remind the world about the known human and ecological damage caused by the use and testing of nuclear devices. In recent years the vision and voice of a few grew to a vision and voice of the many, culminating in the collaborative coordination and voice of ICAN.

The United Nations, with the backing of 122 countries, adopted a legally binding multilateral agreement for nuclear disarmament on July 7. The pact– which outlaws nuclear weapons and lays out a plan to eliminate them– would become law 90 days after at least 50 countries ratify it. To date, 53 countries have signed; three have ratified it. No countries possessing nuclear warheads have supported it including the United States, North Korea, and Russia.

Srs. Ardeth and Carol have been working with ICAN throughout the year in support of the treaty. And our Sisters continue working to build awareness of the issue.

Photos from Dialogue at the United Nations July-Aug 2017