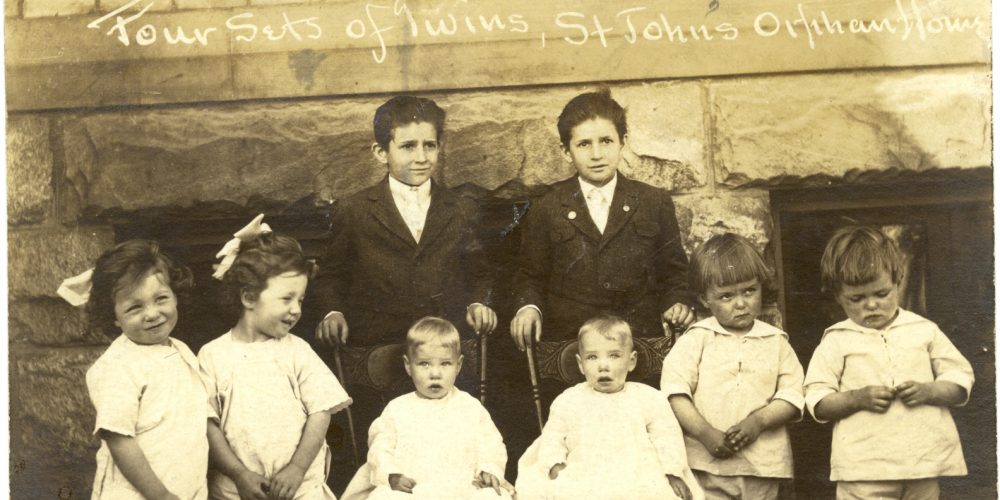 In the late 1800’s, a large number of children were left homeless on the streets after epidemics swept through West Michigan. Catholic church leaders and citizens came together to build St. John’s Orphanage in Grand Rapids.

Dominican Sisters from Traverse City were called Grand Rapids to help care for children at the new shelter.

St. John’s Home not only cared for orphans. Children whose mothers died in child birth or whose families suffered other tragedies were sometimes temporarily cared for by the Sisters. The youngest twins in this photo of four sets of twins living at Sr. John’s Home were the youngest in a large family. When their mother died during their birth, Sisters cared for them until their father remarried and his new wife brought them home creating a large, loving family of 19.

The photo above is of four sets of twins who lived at St. Johns Orphanage in Grand Rapids. Orphanage was a shelter from life’s chaos. Early childhood memories are not warm and fuzzy for Linda McNamara Hopkins (“Mac”) age 69. Much of what she remembers is a blur of screaming and fighting and being dragged into bars with her parents.

Orphanage was a shelter from life’s chaos.

Early childhood memories are not warm and fuzzy for Mac, 69. Most of what she remembers is a blur of screaming and fighting and being dragged into bars with her parents.

“They were both abusive alcoholics,” she recalled. “They would take us to the bars at night, or sometimes we would have to sit in the car and wait.”

Hopkins was taken to a juvenile home. She was 5, hanging out with kids in handcuffs until a judge moved her to the orphanage. She remembers that car ride. She thought she was going home.

“You know, you still love your parents, but they drove me up to this great big place,” she recalled. “The first nun I saw was Sister Leo, and she saw me crying. She had made cookies for me. She told me that it was a wonderful place.”

It would be her home, off and on, until she was 13. When her twin siblings, Donna and Rick, were 3, they were also placed at St. John’s.

You can read more of the story about siblings who found shelter at St. John’s Home, a ministry of the Dominican Sisters of Grand Rapids in the wonderful story written by reporter Marti Suhs, published by the Cadillac News.