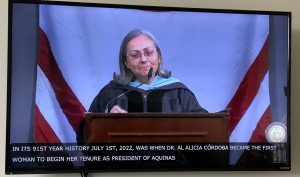 The Dominican Sisters ~ Grand Rapids joined a crowd of well-wishers in our beloved extended Aquinas community. We gathered to celebrate Alicia R. Córdoba, D.M.A., as she was inaugurated as the ninth president of Aquinas College on October 7, 2022 at the Sturrus Sports & Fitness Center. Alicia Córdoba is the first woman president of Aquinas College

Sandra Delgado, OP, prioress of the Dominican Sisters ~ Grand Rapids, spoke at the event. Following are her remarks.

Today we mark an historic event here at Aquinas College. What has its roots in Catholic Junior College, started in 1931, became Aquinas College, and has never in its history had a female president. While the college has had very capable and highly educated Dominican Sisters in the ranks of leadership, faculty and board members, a Sister has never been the president. In its 91 year history, July 1, 2022, was when Dr. Alicia Córdoba, became the first woman to begin her tenure as President of Aquinas College.

But being a woman is not what got Dr. Cordoba to this day. I think she said it best when she said that she believes that God has been preparing her for this moment her entire life. Yes, I believe that God does prepare us for each step of our lives and this is done by our willingness to accept what God offers us. Dr. Córdoba has accepted each new challenge and opportunity as a gift from God, willing to begin something new. An inauguration is the beginning of something new. It is a beginning not only for the person being inaugurated, but for the Institution as well. This is a new beginning for Aquinas College. We look forward to the many ways that Dr. Córdoba will continue to move the college forward and increase its recognition in our state and country.

The Dominican Sisters are very pleased to have you at the helm of Aquinas College. You have embraced the Dominican spirit and are learning about and living the Dominican pillars as each day passes. As Dominicans, we seek the truth in many ways, especially by entering into dialogue with those with whom we agree and more importantly, with those with whom we disagree. “The identity of the Catholic school for a culture of dialogue” a January 2022 document by the Vatican’s Congregation for Catholic Education, states and I quote – “Pope Francis provided three fundamental guidelines to help dialogue, “the duty to respect one’s own identity and that of others, the courage to accept differences, and sincerity of intentions. The duty to respect one’s own identity and that of others, [is fundamental] because true dialogue cannot be built on ambiguity or a willingness to sacrifice some good for the sake of pleasing others. The courage to accept differences [is fundamental] because those who are different, either culturally or religiously, should not be seen or treated as enemies, but rather welcomed as fellowtravelers, in the genuine conviction that the good of each resides in the good of all. And Sincerity of intentions [is fundamental] because dialogue, as an authentic expression of our humanity, is not a strategy for achieving specific goals, but rather a path to truth, one that deserves to be undertaken patiently, in order to transform competition into cooperation”[42].

Dr. Córdoba, we hold you in our prayers. May God fill you with the wisdom needed to make tough decisions, with the courage to stand for the truth, and with the strength to meet the challenges of daily college activity. And finally I offer you the Dominican Blessing – May God creator bless you, may God Redeemer heal you, and May God the Holy Spirit fill you with light.

Reflecting on the path that led her to Aquinas, Dr. Córdoba said, “With all humility, I believe God has been preparing me to serve you. At various points throughout my career, my mentors, friends and family would point to my abilities to organize, bring people together, to have a vision and make it a reality, and most importantly my desire to serve others in order to help them make their own hopes and dreams come true.”  You can read Dr. Córdoba’s full remarks here. 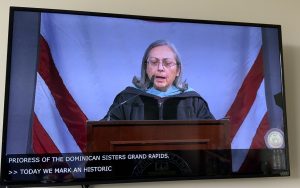 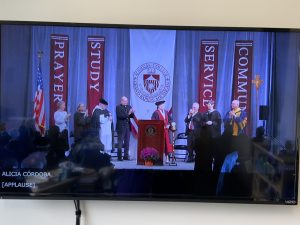 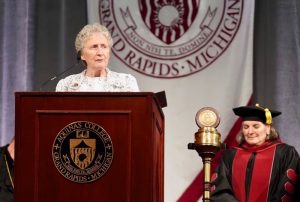