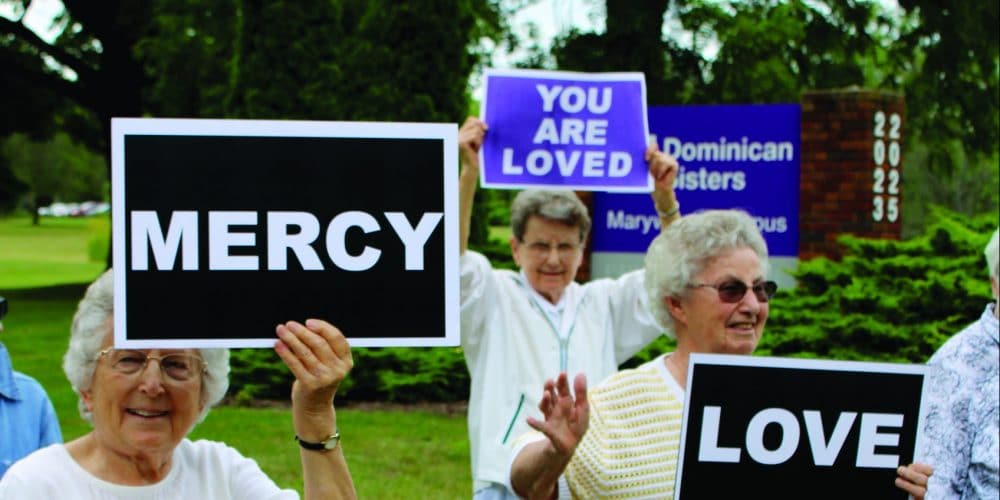 What has happened to the way that we talk with one another? Have we lost the ability to dialogue? We hear and partake in conversations about various topics that are fraught with the capacity for us to talk at one another rather than with one another.

I attended a conference last October where the speakers discussed the way we talk to one another. They used phrases like “language creates reality,” “brutalization of language,” and “crisis of conversation.” We often equate an opinion with the person and somehow question the person’s right to even exist. This is contrary to Catholic Social Teaching (CST) and who we are called to be as followers of Jesus. The first principle of CST calls us to recognize the dignity of every human as made in the image and likeness of God—no matter gender, race, faith tradition, sexual orientation, economic status, or political leaning.

Part of the nature of being made in the image and likeness of God is the desire for communion, for connection. What are we to do when conflict interrupts communion? Walking away, not engaging the other, not speaking to the other are options, but they don’t do much for the thriving of relationship. Rather, the healing of relationships requires dialogue that is courageous, honest, truthful, and vulnerable.

Differences of opinion should be expected for the very reason that each person is wonderfully different.

We would do well to learn from Dominic de Guzman. One day Dominic and one of his friar companions came upon a group of people whose language they didn’t understand. The young friar said, “What if they don’t understand us?” Dominic replied, “Let us pray that we understand them.”

What Dominicans have to offer is a form of dialogue, which is neither perfect nor the final answer. It is AN option for communicating. This form of dialogue is called disputatio, coming from the Latin word disputare, which means to discuss, dispute, or argue. However, there is a distinction to disputatio, which counters our typical understanding of arguing and disputing. Usually, we think of arguing and disputing as having a winner and a loser. I dispute with you in order to get you to see my side of things as being the right way, the correct way, (and in my mind, the only way). Disputatio, however, is a style of dialogue that allows each party to listen­—deeply—to the other’s position for what is right and true, and together the two parties come closer to the Truth.

Given its focus on finding what is right in the other’s position, disputatio is a call to become more God-like, more like God, who, as we know from Jesus, embraces dialogue as a means for communion. At the very least, disputatio is an invitation to civility and an acknowledgement that I might not know everything and may not always be right—-as much as I would like to be and as hard as that is to admit.

Dear Neighbor: May you be inspired by the language of love.

Dialogue is one of the steps we take, over and over, on our journey of life. It invites us to move beyond our comfort zone, sometimes physically, oftentimes internally, in our minds and hearts as well. This is part of Dominican itinerancy. Dialogue is not always a comfortable place to be, because it is a place of conversion, which can lead to peace and understanding.

Our invitation as preachers and as Christians is to speak with the language of Love in a way that taps into people’s experiences and helps them to know this Love in a profound way. I am convinced that if we could fine-tune
our ability to engage the other in dialogue, we would witness the transformation of our world and Church. Such language would go a long way in healing the heart and soul of our own nation.

The Dominican Sisters~Grand Rapids witness to a desire for all people to live in harmony. Dominican Sisters, Associates, Sunday Assembly, and neighbors gathered each Thursday for seven weeks to share the Word of God from our front yard on Fulton Street. 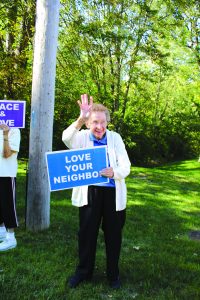 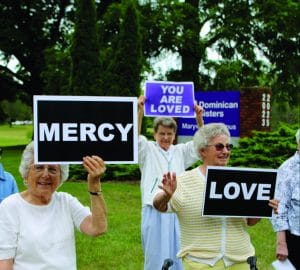