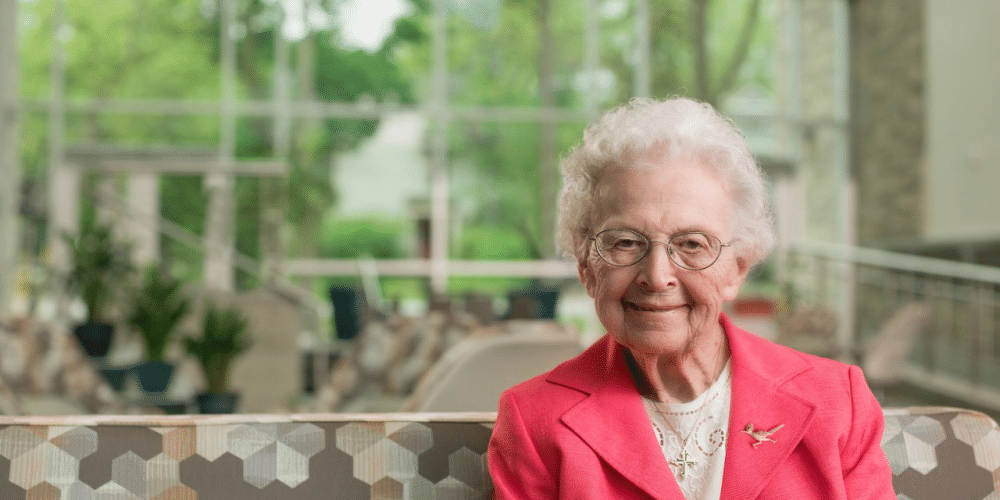 In December, Aquinas College honored Sr. Aquinas Weber (’58) when it announced an endowment scholarship in her name. The Sr. Aquinas Weber Endowment Scholarship has – so far – raised more than one million dollars from alumni and friends, and is the largest of its kind at Aquinas. College President, Kevin Quinn, and Gina Covert, Vice President for Advancement, both commented that raising $1million in the midst of a global pandemic speaks to the community’s admiration for Sr. Aquinas and to the committee’s and donors’ commitment to the college. Fr. Bob Keller, OP, also commented that it speaks to the human spirit to give to good causes even in trying times.

During the Zoom celebration, the organizers showed a brief slide presentation of Sr. Aquinas and all she has done for the college and West Michigan as a teacher, leader, and source of inspiration over her 97 years of life. Four of the initial fifty student recipients expressed enormous gratitude to Sr. Aquinas and the committee for the scholarship aid they have received. With this assistance they can continue their studies and set their sights on their goals to be contributing members to society and the college in the future.

Sr. Aquinas expressed amazement and humility at the news of the scholarship and stated, “When you give back, no matter how small or great, it is always an opportunity to share what you learned at Aquinas College.”

President Quinn stated, “I cannot think of a more meaningful way to honor a woman who has dedicated so much of herself to students at Aquinas and their study.”
Congratulations, Sr. Aquinas!