A Letter From Pope Francis To the Order of Preachers 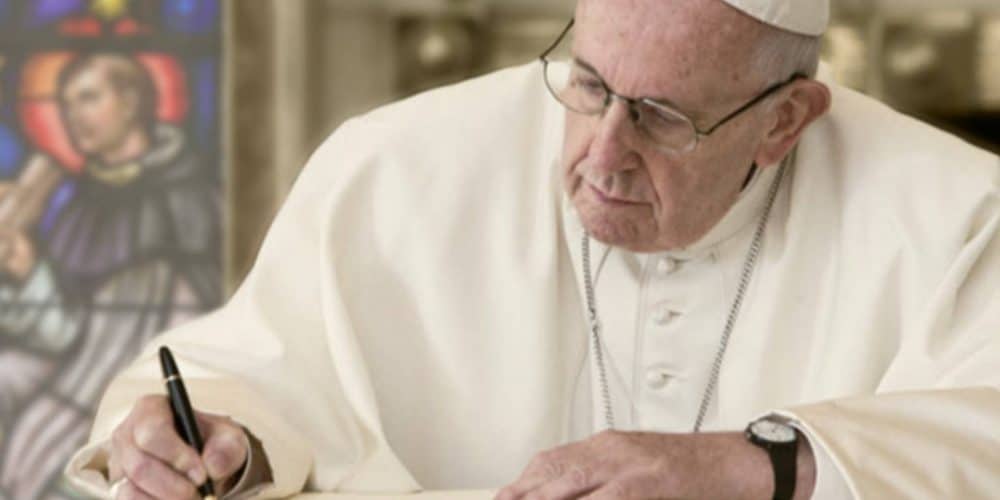 To Brother Gerard Francisco Timoner, O.P., Master General of the Order of Preachers

Praedicator Gratiae: among the titles attributed to Saint Dominic, that of “Preacher of Grace” stands out for its consonance with the charism and mission of the Order he founded. In this year that marks the eight hundredth anniversary of Saint Dominic’s death, I gladly join the Friars Preachers in giving thanks for the spiritual fruitfulness of that charism and mission, seen in the rich variety of the Dominican family as it has grown over the centuries. My prayerful greetings and good wishes go to all the members of that great family, which embraces the contemplative lives and apostolic works of its nuns and religious sisters, its priestly and lay fraternities, its secular institutes and its youth movements.

In the Apostolic Exhortation Gaudete et Exsultate I expressed my conviction that “each saint is a mission, planned by the Father to reflect and embody, at a specific moment in history, a certain aspect of the Gospel” (No. 19). Dominic responded to the urgent need of his time not only for a renewed and vibrant preaching of the Gospel, but, equally important, for a convincing witness to its summons to holiness in the living communion of the Church. In the spirit of all true reform, he sought a return to the poverty and simplicity of the earliest Christian community, gathered around the apostles and faithful to their teaching (cf. Acts 2:42). At the same time, his zeal for the salvation of souls led him to form a corps of committed preachers whose love of the sacred page and integrity of life could enlighten minds and warm hearts with the life-giving truth of the divine word.

In our own age, characterized by epochal changes and new challenges to the Church’s evangelizing mission, Dominic can thus serve as an inspiration to all the baptized, who are called, as missionary disciples, to reach every “periphery” of our world with the light of the Gospel and the merciful love of Christ. In speaking of the perennial timeliness of Saint Dominic’s vision and charism, Pope Benedict XVI reminded us that “in the heart of the Church, a missionary fire must always burn” (Audience of 3 February 2010).

Dominic’s great call was to preach the Gospel of God’s merciful love in all its saving truth and redemptive power. As a student in Palencia, he came to appreciate the inseparability of faith and charity, truth and love, integrity and compassion. As Blessed Jordan of Saxony tells us, touched by the great numbers who were suffering and dying during a severe famine, Dominic sold his precious books and, with exemplary kindness established a center for almsgiving where the poor could be fed (Libellus, 10). His witness to the mercy of Christ and his desire to bring its healing balm to those experiencing material and spiritual poverty was to inspire the foundation of your Order and shape the life and apostolate of countless Dominicans in varied times and places. The unity of truth and charity found perhaps its finest expression in the Dominican school of Salamanca, and particularly in the work of Friar Francisco de Vitoria, who proposed a framework of international law grounded in universal human rights. This in turn provided the philosophical and theological foundation for the heroic efforts of Friars Antonio Montesinos and Bartolomé de Las Casas in the Americas, and Domingo de Salazar in Asia to defend the dignity and rights of the native peoples.

The Gospel message of our inalienable human dignity as children of God and members of the one human family challenges the Church in our own day to strengthen the bonds of social friendship, to overcome unjust economic and political structures, and to work for the integral development of every individual and people. Faithful to the Lord’s will, and prompted by the Holy Spirit, Christ’s followers are called to cooperate in every effort “to give birth to a new world, where all of us are brothers and sisters, where there is room for all those whom our societies discard, where justice and peace are resplendent” (Fratelli Tutti, 278). May the Order of Preachers, now as then, be in the forefront of a renewed proclamation of the Gospel, one that can speak to the hearts of the men and women of our time and awaken in them a thirst for the coming of Christ’s kingdom of holiness, justice and peace!

Celebrating Milestones of Service and the Work of Our Hands: Employee Appreciation Week at Marywood