The Dominican Sisters ~ Grand Rapids Archives have been the official repository for materials about the origin, history and growth of the Grand Rapids Dominican Congregation of Our Lady of the Sacred Heart and its ministries since 1877. Special collections include materials about Marywood Academy, Holy Rosary Academy, Aquinas College and other ministries of the congregation primarily in Michigan, New Mexico, Peru, Honduras and Canada. These collections include documents, audio-visual recordings, books, artifacts and artwork.

The archives contain the records of deceased and former members of the Congregation, as well as some of the records of the students of Marywood Academy.

Phone, e-mail and postal mail requests for limited research are accepted. Most records are open to research — however, some records are restricted. Credits must be given for records used in research. 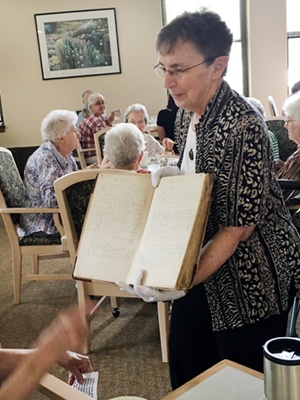 The Legacy Room
Changing exhibits feature the history of the Grand Rapids Dominican Sisters and their ministries around the world from 1853 through current day. Please note, due to COVID precautions, the Legacy Room is currently closed.

The official repository for materials about the origin and history of the Congregation from 1877 forward.

Please note, due to COVID precautions, the Archives is currently closed to in-person visits.

About the Archives Collections

Several books have been written about the history of the congregation on the Dominican Sisters ~ Grand Rapids. Period Pieces: An Account of the Grand Rapids Dominicans 1853-1966 was written by Sister Mona Schwind OP when she was the archivist of the congregation. Tapestry in Time: The Story of the Dominican Sisters Grand Rapids, Michigan, 1966-2012 was edited by Sister Mary Navarre OP before she became the archivist. Both books are available for purchase by contacting the Archives.