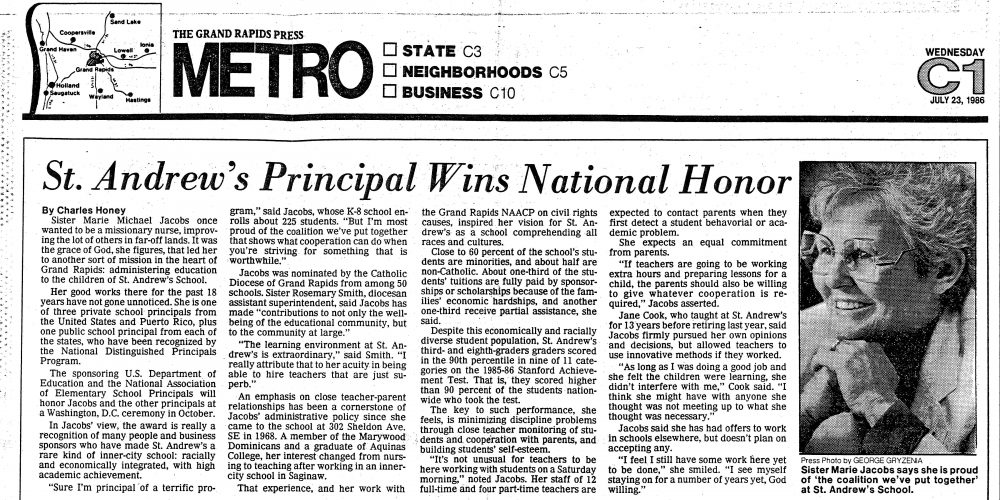 Sister Marie Michael Jacobs once wanted to be a missionary nurse, improv­ing the lot of others in far-off lands. It was the grace of God, she figures, that led her to another sort of mission in the heart of Grand Rapids: administering education to the children of St. Andrew’s School.

Her good works there. for the past 18 years have not gone unnoticed. She is one of three private school· principals from the United States and Puerto Rico, plus one public school principal from each of the states, who have been recognized by the National Distinguished Principals Program.

The sponsoring U.S. Department. of Education and the National Association of Elementary School Principals will honor Jacobs and the other principals at a Washington, D.C. ceremony in October.

In Jacobs’ view, the award is really a recognition of many people and business sponsors who have made St. Andrew’s a rare kind of inner-city school: racially and economically integrated, with high academic achievement.

“Sure I’m principal , of a terrific program,” said Jacobs, whose K-8 school en­rolls about 225 students. “But I’m most proud of the coalition we’ve put together that shows what cooperation can do when you’re striving. for something that is worthwhile.”

Jacobs was nominated by the Catholic Diocese of Grand Rapids from among 50 schools. Sister Rosemary Smith, diocesan assistant superintendent, said Jacobs has made “contributions to not only the well­being of the educational community, but to the community at large.”

“The learning environment at St. Andrew’s is extraordinary,” said Smith. “I really attribute that to her acuity in being able to hire teachers that are just su­perb.” An emphasis on close teacher-parent relationships has been a cornerstone of Jacobs’ administrative policy since she came to the school at 302 Sheldon Ave. SE in 1968. A member of the Marywood Dominicans and a graduate of Aquinas College, her interest changed from nurs­ing to teaching after working in an inner­city school in Saginaw.

That experience, and her work with the Grand Rapids NAACP on civil rights causes, inspired her vision for St. An­drew’s as a school comprehending all races and cultures.
Close to 60 percent of the school’s stu­dents are minorities, and about half are non-Catholic. About one-third of the stu­dents’ tuitions are, fully paid by sponsor­ships or scholarships because of the fam­ilies’ economic ·hardships, and another one-third receive partial assistance, she said.

Despite this economically and racially diverse student population. St. Andrew’s third- and· eighth-graders graders scored iil the 90th percentile in nine of 11 cate­gories on the 1985-86 _Stanford Achieve­ment Test. That is, they scored higher than 90 percent of the students · nation­wide who took the test.

The key to such performance, she feels, is minimizing discipline problems through .close teacher monitoring of stu­dents and. cooperation with parents, and building students’ self-esteem.

“It’s not unusual for teachers to be here working with students on a Saturday morning,” .noted Jacobs. Her staff of 12 full-time and four part-time teachers are expected . to contact parents when they first detect a student behavorial or aca­demic problem.

She expects an equal commitment from parents.

“If teachers are going to be working extra hours and preparing lessons for a child, the parents should also be willing to give whatever cooperation is re­quired,” Jacobs asserted.
Jane Cook, who taught at St. Andrew’s for 13’years before retiring last year, said Jacobs firmly pursued her own opinions and decisions, but allowed teachers to use innovative methods if they worked.

“As long as I was doing a good job and she felt the children were learning, she didn’t interfere with me,” Cook said. “I think she might have with anyone she thought was not meeting up to what she thought was necessary.”

Jacobs said she has had offers to work in schools elsewhere, but doesn’t plan on accepting any.
“I feel I still have some work here yet to be done,” she smiled. “I see myself staying on for a number of years yet, God willing.”