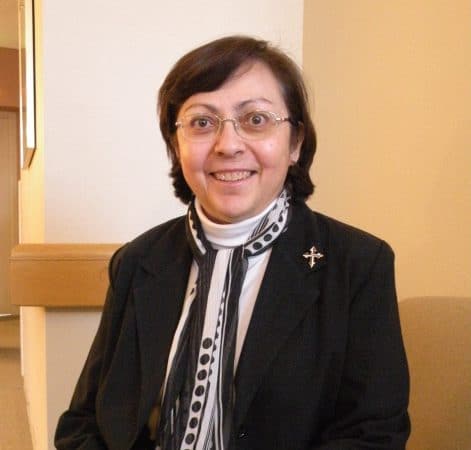 Sister Sandra Delgado entered the Congregation as a Candidate to begin discernment in 1976 after graduating from college and working for one year. She made final profession of vows as a Dominican Sister~Grand Rapids in 1984. On July 1, 2018, she will become the Prioress of the Congregation that has formed her these past 42 years. She served as Vicaress on the Leadership Team from 2012-2018.

Sister Sandra graduated from Nazareth College, Kalamazoo with a secondary teaching certificate and Bachelor of Arts degree in Spanish and Social Studies. She also received a Master of Arts degree from Michigan State University in Adult and Continuing Education.

The Congregation received a notice from the Glenmary Home Missioners describing their plan to develop a full-time adult education program in the small eastern Kentucky town of Olive Hill. Sister Sandra responded to that call which led to nearly 27 years of ministry in Kentucky. Her first ministry in Olive Hill began as a call to serve under-educated and uneducated adults. At the time, statistics showed 400,000 adults could not read and nearly 600,000 had not graduated from high school. Sister’s presence in Olive Hill resulted in the establishment of the Olive Hill Adult Learning Center where she was director, teacher, volunteer coordinator and fund raiser. She also began to provide skills training to other adult educators at the request of her regional program supervisor. This role led to greater involvement with the State Department of Education to access funding for her program as well as providing training throughout the State. When a position at the Department of Adult Education became available, Sister was hired. There she served as program supervisor of state and federally funded programs. She also continued to provide teacher training especially in the areas of assessment and teaching adults with learning disabilities. Like other roles, this position led to accepting a new ministry in Kentucky. Sister Sandra became the first Director of Hispanic Ministry in the Diocese of Lexington. She assisted parishes in providing pastoral and social services to the growing Hispanic population in the Diocese. As an educator, she provided faith and basic education opportunities to the Hispanic community. Under her direction, the Diocese developed and implemented its first Pastoral Plan for Hispanic Ministry. While serving in this ministry, Sister Sandra was elected by her Congregation to serve as Vicaress, a call that brought her back to the Motherhouse at Marywood.

Sister Sandra was born and raised in Saginaw, Michigan to Marcos and Alma Delgado. She is the third child, only daughter, of six children. “There were no girl chores or boy chore in our home. My father believed we all had responsibilities inside and outside the house. That really helped shape my attitude about being responsible for each other as well as others.” Sister remembers with great fondness her childhood years with family, friends, neighbors and schoolmates. She was educated by the Dominican Sisters~Grand Rapids at Sacred Heart and St. Joseph’s from 1st to 10th grades. The family moved to another part of the city, so Sister graduated from St. Stephen High School, where she met the Adrian Dominicans and the Mercy Sisters.

Pray for persons with dementia, their families and caregivers

In October 2014, Sandra Delgado, OP joined other faith leaders in Grand Rapids to call for protection of children crossing the United States border as they flee violence and more in other parts of the world.

Her presence at prayer gatherings calling for an end to gun violence and human trafficking, for a safe path for people migrating and immigrating to the United States, for protection of children… is informed, intentional, and called forth by a loving, merciful God.

Saturday Story: Hearts Open for YOU

About the Feast of Our Lady of Guadalupe by Sr. Sandra Delgado, OP

100th Anniversary of Laying of Cornerstone of Motherhouse at Marywood

A Message from Sandra Delgado, Prioress

Saturday Story: Finding Ways to Shine Light In the Dark

Forward in Faith: Toward a Future Full of Hope