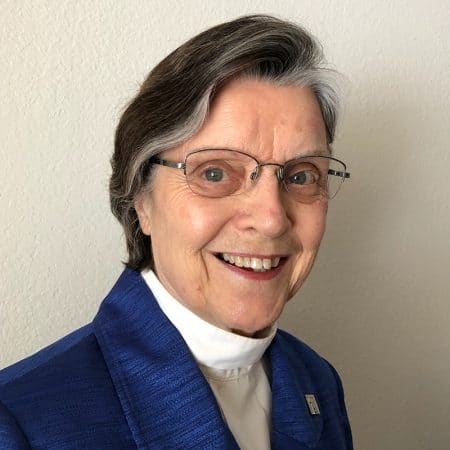 “I give you thanks for this wondrous life; all your works are wonderful.” ~ Psalm 139:13

The joys and wonders, the laughter and tears, the faith and fidelity of living sixty years as a Grand Rapids Dominican is a blessing from God that I celebrate this year. This journey could never have been imagined when I entered Community in 1960.

Rosanne was born to Bernice (Brasseur) and Stanley Szocinski on May 21, 1942 in Pontiac, Michigan. The oldest of four children, Rosanne learned to be responsible and caring. Prayer and Church were the bedrock of her family life.

Beginning high school at St. John’s in Jackson, Michigan, Rosanne transferred to Marywood as an aspirant in the eleventh grade. She joined the community as a postulant in 1960 and in 1961 she received the name Sister M. Stanice of the Child Jesus, later returning to her baptismal name. Her great aunt, Sister Wenceslaus Szocinski, OP, was her mentor to Dominican life.

Sister Rosanne’s education includes a BA in History and an MA in Religious Education from Aquinas College and an MA in Education from Western Michigan University. Her teaching career of thirty-five years began at I.H.M. in Grand Rapids in 1964. She taught at Aquinas College, then Bay City, New Mexico, and Alabama. She returned to Michigan to teach in Greenville and Charlevoix. Following a Sabbatical she studied to be a chaplain.

After six years as director of pastoral care at Catherine Kasper Life Center in Donaldson, Indiana, she returned to Marywood as Common Life Coordinator. Presently Sister Rosanne ministers at St. Paul the Apostle Parish in Grand Rapids, Michigan. Her hobbies include reading, study, baking and cooking, singing in choirs, and being in nature.

“Reflecting on the years that bring me to Diamond Jubilee fills my heart with gratitude to God, Community, Family, Friends, and all who have supported and loved me,” says Sr. Rosanne.

Pray for the sick and dying

Sister Rosanne Szocinski shares her witness to a lifelong vocation as a Dominican Sister Grand Rapids with students at St. Paul the Apostle Catholic School in Grand Rapids, Michigan.

Sister Rosanne Szocinski explains the tabernacle to four-year-olds on a tour of the church.

Sr. Rosanne enjoys baking cookies, bread, and pizza, all fresh from the oven.

Forward in Faith: Toward a Future Full of Hope