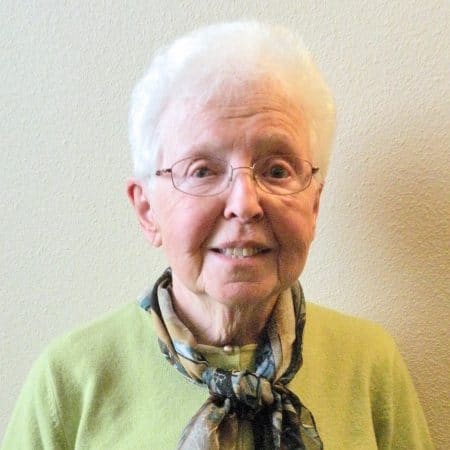 My heart will sing and not keep silence. O Lord, my God, forever will I sing your praise. This antiphon from Dominican Praise, sums up the great opportunities I have had since celebrating my Golden Jubilee 10 years ago. I am living in community and ministering as a liturgical musician at Marywood. God heard your prayers and healed my heart, giving me the joy and passion to be a choral conductor of a choir who never ceases to feed my Spirit.

Sister Laurena’s love of musical praise included directing the Marywood choir. Her eyes sparkle and her soul rejoices. The fifth of ten children of Joseph and Larena Schneider Alflen, she was called from birth to religious life, music and art. Baptized Rose Mary after her maternal grandmother, Rose, she and her sister Margaret became organists at St. Mary Magdalen, Detroit; it often required them to walk, ride their bikes or take the bus to church and back.

Rose Mary became an aspirant in 1946 and entered as a postulant in 1950. At reception, she received the name of her mother and the title of St. Joseph. Her ministry was centered in school and church music, hand bells and marching bands. For many years she performed in symphonic choirs, serving as president of the choral society in Saginaw.

When Vatican II brought about exciting changes in liturgical music, she was at the forefront introducing works by Deiss, the Jesuits, Gelineau and many others who built upon the heritage of Gregorian chant. These last several years have been a special grace of living in community and the Incarnational mystery of prayer, study and life.

Pray for legislation to put a ban on assault weapons

Sister Laurena was one of three Grand Rapids Dominican Sisters who told their stories at THE MOTH live event on Sept. 15, 2015 at the Wealthy Theatre in Grand Rapids, Michigan.

Sister Laurena’s joyful presence warms the world around her.

Sister Laurena’s creative gifts include piano, bells, and singing. She began sketching and painting in her 70s. Her oil paintings appear in shows around West Michigan.