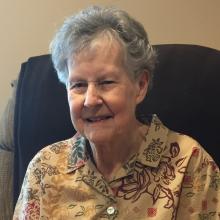 Marjorie Ann Birkman, born March 31, 1930 in Hart, Michigan, was the first of seven children of Peter and Pauline Malburg Birkman. She describes her early life with her four sisters and two brothers as one with “little money” and “much love.” Until she was eleven years old her family moved often due to her father’s work as a farmhand and carpenter. She attended one-room public schools during these years, and for a brief time she boarded with a family near St. Gregory’s Parish in Hart to prepare for her First Communion.

Eventually, the family was able to purchase a farm in Walkerville where Marjorie completed her education in the local public school. Life on the farm meant long hours of hard work in the pickle, corn, and hay fields. Sister Jean Marie recalls her early years as difficult but happy.

Because the family lived far from a Catholic church, they could not attend Sunday Mass on a regular basis. Instead they prayed the Rosary around the kitchen table and learned about their faith from their parents. Weeklong summer classes with the Sisters furthered their religious education. It is here that Marjorie first met the Dominican Sisters. Later she felt a calling to serve God as a Sister and knowing only Dominicans (of whom she was somewhat frightened), she decided to enter the Congregation September 1948.

Through study at Aquinas College she earned a Bachelor of Arts degree in history, and two M.A.s – one in Education and the other in Religious Education. In addition, Sister took advantage of opportunities to continue her education through RCIA training, workshops, and spiritual renewal programs.

In 1999, following a well-earned sabbatical year at the Berakah Retreat Center, New Hampshire, Sister Jean Marie embarked on a ministry of service in pastoral work at Holy Trinity Parish, Comstock Park and Holy Name of Jesus Parish in Wyoming.

Sister Jean Marie was noted for her calm demeanor, determination to solve problems, and ability and competence to handle situations, no matter how difficult. At the completion of her term at Sacred Heart, Mt. Pleasant, in June 1977, Mayor Sid Smith proclaimed June 12 “Sister Jean Day” in recognition of her dedication to the children of the community and for working closely with parents and teachers to bring about a unique individualized program with emphasis on gradual progress and Christian maturity.

In 1999, the year of her Golden Jubilee, Sister Jean Marie retired from teaching after fifty years. She had been principal at St. Joseph the Worker School for twelve years and was actively involved in parish activities. Her pastor said: “Sr. Jean Marie has been a very strong Dominican presence in this parish. We’re going to miss her, but one of the neat things she’s done is make it possible to carry on that presence.”

At that time, she wrote: “Is it really 50 years! So many experiences of support, challenges, growth, and happiness! . . . In 1948 I thought I was ‘giving up’ much. Instead, I was and continue to be given much more than I could have ever dreamed or desired. Thank you!”

In 2004, unknowingly foreshadowing what was to come, she quoted James Barrie, “God gave us a memory that we might have roses in December.” Little did she know that just six years later, memory would be the only path to sight.

Her buoyant personality, resourceful spirit and strong faith were put to the test by the sudden, unexpected loss of vision due to temporal arteritis, an inflammation of the arteries that leads to blindness. She accepted total blindness with faith and trust in God as well as gratitude for her supportive community. As long as she was able, she continued to minister via phone calls to parishioners at Holy Name of Jesus Parish. She also served on the Advisory Council of the Dominican Associate Life board. Through her attentive listening, deep faith, wise words and gentle heart, she ministered to visiting Sisters and friends.

Sister Jean loved to read, cook, write letters, travel and enjoy quiet time near lakes and streams. She regarded nature as God’s “second Bible.” She wrote, “I have always treasured God’s beautiful creation of blue sky, green grasses and trees, pretty flowers, cool water . . . everything and everyone . . . each and every person! All evidence of God is Good!”

Sister Jean Marie allowed God to work through her in sickness and in health all her days; holiness was her reward.

Sister Jean Marie is survived by her sisters, Donna VanderZanden of Chicago, Illinois and Judy Coulier of Fruitport, Michigan; her brother Donald (Debby) Birkman of Walkerville, Michigan; her sister-in-law Charlene Birkman of Hart, Michigan; and her cousin Sister Nancy Malburg, OP; nieces, nephews, friends and Sisters in her Dominican Community.

We commend Sister Jean Marie to your prayers.

Pray for the visually impaired

As long as she was able, Sister Jean Marie provided pastoral presence for those who were sick by connecting with them via phone calls.

Sister Jean Marie was noted for her calm demeanor, determination to solve problems, and ability and competence to handle situations, no matter how difficult.

Sister Jean Marie Birkman: the Comfort of Living in Community