A STONE NOT THROWN was created through the reading of scripture. In biblical times the act of stoning in public was accepted as capital punishment. I was moved by the biblical passage of the adulterous woman in John’s Gospel and by the men who demanded that she be stoned to death. Jesus turned the stoning into an act of forgiveness. No one cast a stone at her. Stoning to death today is unimaginable; however, rock throwing at an enemy can be expressed as corporate anger in troubled countries of the world. Hand and stone are accomplices in wrongdoing. The title of the sculpture was derived from such actions. The hand in this sculpture lays gently over a pile of stones. It gives the impression of intended good by preventing the stones from being thrown, thus hindering the executioners from throwing them and saving the sinner’s life.

COMPASSION was created with a piece of alabaster from a quarry in Whittemore, Michigan. It was among a pile of discarded, imperfect pieces of stone. The sculpture was begun a year ago and set aside due to its flawed composition. Determined to complete this sculpture in 2012, I studied the stone with all its flaws: tight black veins settled in a concentrated area, compressed mud, and various textures. The stone saddened me and captured my heart. I chiseled and let the stone lead me. I worked around the troubled areas and detected the head of a suffering man – a sad image and compatible with the stone. I continued to work and then carved a hand to caress and comfort the ailing gentleman. Compassion was created with the use of chisels and mallet, rasps and files. Sandpaper provided a smooth surface before the tints of yellow, purple and white paint were brushed onto it. Polish and buffing finished the sculpture. The sculpture touches my heart with compassion for those who suffer.

FIVE LOAVES AND THREE FISH was created from a 1-foot square block of green soapstone that was purchased in 2008. The theme of the sculpture was based on the biblical passage of Jesus feeding a multitude of people with only a few loaves of bread and a couple fish. Several baskets of fragments were saved after the feeding of the people. In the sculpture, five loaves are placed in a worn basket and three fish are stacked near the corner of the basket. Many Christians today are fed Holy Communion in the form of consecrated, unleavened bread. It is a pleasure to share FIVE LOAVES AND THREE FISH, the fruit of my contemplation, with the public.

MOTHER AND CHILD is a bronze sculpture. 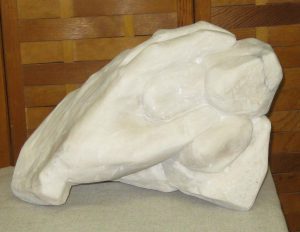 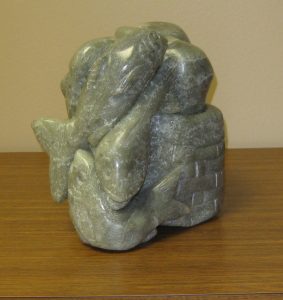