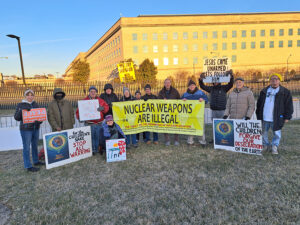 Commemorating Massacre of the Holy Innocents Past and Present

Early morning on December 28, 2022, fourteen peacemakers from the DMV area and beyond held a nonviolent witness at the Pentagon, the center of warmaking on the planet, to commemorate the feast of the Massacre of the Holy Innocents–-past and present. We carried with us the spirit of many friends from the Atlantic and Southern Life communities, the Catholic Worker, and elsewhere who ordinarily would attend this witness, but were not able to be physically present. The witness was organized by the Dorothy Day Catholic Worker.

As a beautiful sunrise unfolded, we gathered for our witness in the “designated protest area” on the southeast side of the Pentagon displaying signs and banners as civilian workers and soldiers passed by and a small group of Pentagon Police kept watch over us.

Art Laffin offered a brief introduction for the witness which was followed by Rev. Chuck Booker reading a Gospel account of the massacre of the innocents, (Mt. 2:13-18). We then sang the “Coventry Carol” and Paul Magno and Michele Dunne read a poem by Sr. Anne Montgomery (Presente!): “Feast of the Holy Innocents-1991-In Memoriam: Mass Graves.” The “Cry of Ramah” was then sung by all. This was followed by a Litany (see below) that was read by Merwyn DeMello, John Kelly, Mary Grace, Mike Walli, Erik Johnson, and Libby Johnson. In memory of Phil Berrigan (Presente!) who died 20 years ago on Dec. 6, 2002, Kathy Boylan and Frank Panopoulos read an excerpt from Phil. Carol Gilbert and Mike Brown then read a declaration: “Redeem the Times.” We concluded the witness by singing A Child Will Lead Us, Do Not Be Overcome By Evil and Vine Fig Tree and offering the Lord’s Prayer.

Art said, “During this Holy Season we are reminded once again of the promise of Emmanuel, God is with us! And we are invited by Jesus to make the Word flesh and to nonviolently resist the Herod’s of this world and all forces of death. We are ever mindful of the hope-filled message of the angel Gabriel to Mary of Nazareth, that “nothing will be impossible for God!” As we approach the end of 2022 and move into a New Year, let us keep our eyes on the prize and do all we can to make God’s reign of justice, love and peace a reality as we strive to create the beloved community and a nonviolent world.”

“When Herod realized that he had been deceived by the magi, he became furious. He ordered the massacre of all the boys in Bethlehem and its vicinity two years old and under, in accordance with the time he had ascertained from the magi. Then was fulfilled what had been said through Jeremiah the prophet: A voice was heard in Ramah, sobbing and loud lamentation; Rachel weeping for her children, and she would not be consoled, since they were no more.” (Matt. 2:16-18)

“Good Morning. We greet everyone going into the Pentagon and the police in a spirit of peace and nonviolence. Today, Christian churches commemorate the massacre of the Holy Innocents, recalling how Herod, fearful of being removed from power, sought to destroy the child Jesus by ordering the slaughter of boys under two years old in and around Bethlehem. We, members of the DDCW, Pax Christi, Assisi Community, the Atlantic Life and Southern Community and other peace groups, come to the Pentagon, the center of warmaking on our planet, to remember the innocents who have died–past and present–due to greed, oppression, racism and war. Today, in this time of perpetual war, nuclear peril and climate chaos, the lives of countless innocents, like those in Bethlehem, are endangered. These include the Palestinian innocents and children who continue to suffer and die today due to the ruthless U.S.-backed Israeli occupation of the West Bank and Gaza as well as all children living under systems of violence, oppression and white supremacy. Our faith compels us to nonviolently resist this onslaught. We are ever so mindful that children are always the first victims of war. We call into our presence this morning all the Holy cloud of Witnesses, including those who have witnessed here at the Pentagon proclaiming Jesus’ Gospel of Nonviolence in resistance to a warmaking empire.