An Update from Our Dominican Family in Ukraine 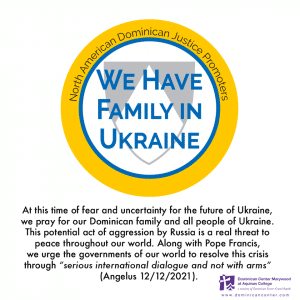 It’s already been a couple days since my last letter. This interruption doesn’t mean that something tragic has happened to us. Quite the opposite. I finally managed to travel to Fastiv. I had already started missing the conversations with my brothers Misha, John, Paul, and Igor, and Dominican sisters Damion, Monica, Augustine, and Gala, as well as the wonderful volunteers who work at the House at Saint Martin, Vera, Katia, and Sophie, just to mention a few. Phone conversations can’t replace actual meetings, after all.

The trip to Fastiv, around 80 km, was peaceful. If not for checkpoints, document checks, and all kinds of obstacles that have been built at the entrances to the city, one might say that there are no signs of war. But the war obviously is there and is quite close to Kyiv and Fastiv. And it is very brutal and terrifying. At night in Fastiv, one could hear distant explosions. I must have slept very deeply after all, since only in the morning I learned from Misha that they had an alarm and the sirens had been blaring. Another example of the proverb: the less you know, the better you sleep.

The Dominican priory in Fastiv, a very simple building, is really a slightly upgraded temporary construction crew lodging, and it was donated to the Dominicans in the 90s by a construction company. The conditions are very simple, but the fathers who live there had always been reluctant with upgrades, preferring to invest their means in the restoration of the church, or in the construction of the House of Saint Martin, which became a great center of help for the needy.

In a tiny chapel of the priory, we celebrated the liturgy of the hours. In front of us was the crucifix depicting Christ dying on the cross and two statues representing Saint Dominic and Saint Catherine of Siena kneeling at the cross. These old figures come from some Dominican church or priory, from even before the second world war. I remember when Father Misha and I bought them from an antique seller in Chortkiv.

Today we are facing war again, and the brothers are praising God before those same statutes. When I was praying, I was thinking about the Dominican Family. We are receiving so many letters and messages these days from brothers and sisters around the world. So many signs of solidarity, compassion, and assurances of prayers and fasts for Ukraine. Today we were reading in the breviary the homily of Saint Leo. The great pope encourages us to never be ashamed of the cross. “No one should fear to suffer for the sake of justice; no one should lose confidence in the reward that has been promised. The way to rest is through toil, the way to life is through death.” In these past days, words like these added strength and hope.

After the Mass, I went with Father Paul for coffee to the House of Saint Martin. In the cafeteria, we met one of the families who moved to Fastiv for the time of war. A mother and three children. The little ones were eating colorful cookies — very pleased on this Sunday morning. Another new tenant of our house joined our table, a cat of the Sphinx breed. To me, he is very exotic. With a certain level of distrust, he started approaching me. I think he was hungry. Or maybe he was just missing the company of humans, like a large number of animals left behind during the war by their owners. A moment later, the doors opened and a little girl peeked into the room. Out of breath, she yelled in Russian, “Have you seen a black cat?” “No,” we responded. “It’s okay,” she sighed and kept going. A moment later a mother and a son arrived. On the menu for breakfast was Ukrainian borscht. The young boy very clearly did not want to eat it. His mom started feeding him. I offered her a chair: “Please, sit down. It will be easier.” She thanked me and smiled. Sadness was in her face. just like on the faces of many other mothers that I met today in Fastiv. On the way back to the priory, Father Paul was stopped by another lady. She was also accompanied by a little boy. “Can we sign up here for the evacuation to Poland?” she asked. Paul explained to her that it will be possible tomorrow. She thanked us and asked if she could sign up someone else in addition to her and her son. As she was leaving she added, “We are from Donetsk. From Horlivka. We’ve already escaped from war once, and now we are escaping again.” Her city was overtaken by Russian separatists in 2014 and became part of the so-called Donetsk People’s Republic. There are many such families, lonely mothers, children, who have to run constantly for their lives.

The brothers from Fastiv helped to evacuate 972 people since the beginning of the war. A substantial part of them are already safely in Poland. Others moved to western Ukraine. I was able to see warehouses with the humanitarian help arriving in Fastiv from Ukraine and all of Europe. We couldn’t do anything without all of you. Thank you.

Leaving Fastiv, I took with me a couple loaves of freshly baked bread. Again, the smell of bread in my car! Although, the smell was a little broken by the aroma of gasoline that I keep in bottles since I purchased it on the way to have fuel for an electricity generator. I hope it will work! My return took a couple long hours because, at the entrance to Kyiv, every car must be checked. On the other hand, it is comforting that we still have access to the city and that we still have food. The Russians haven’t succeeded in surrounding us.

I passed on a couple loaves of bread from Father Misha to the Polish embassy. I had tea with the Polish ambassador who, apart from the apostolic nuncio, is the only diplomat from Europe who is still in Kyiv, and maybe the only one from the whole world. I was given a couple things that might be useful in helping people. During our conversation, we stood by the window. We were surprised and very much overjoyed to see the workers of the Kyiv city services sweeping the streets. Like the old days, like the war never happened. It is very beautiful. These days the simplest normalcy becomes unusually meaningful.

I would like to end with the amazing witness of Catholics from Russia. Somebody was sharing one today from the pulpit. I was very moved by it. If by some miracle its author reads this letter, I would like to thank him for his courageous and humble words. You are a noble person. May the words of Christ be fulfilled in your life: “If you remain in my word, you will truly be my disciples, and you will know the truth, and the truth will set you free.” (Jn 8:31) …Although, after what you wrote, these words are already being fulfilled in your life.

“We pray for you. We are ashamed! We are ashamed! We are ashamed that we are Russians. For my whole life now, I will feel guilty before the Ukrainian nation. I never voted for Putin; I went to all the legal and illegal demonstrations to support Ukraine, but I still couldn’t do anything. I would like to ask all Ukrainians for forgiveness for all the crimes which today are being committed at Russian hands. But who needs my contrition if people are still suffering and dying in Ukraine. All Russians are now committing the irremovable sin of Cain, and no explanation will help. I understand that this is my personal opinion, and many, even people with similar views, will be appalled. Nonetheless, a number of generations of Russians will have to carry responsibility for these atrocities. I want to write it openly. If you want to publish it, I will be satisfied. Do not hide my name; I am not afraid. We are praying for you and all of Ukraine. May God give you peace and happiness!” ~ Author Unknown

With greetings and requests for prayer,