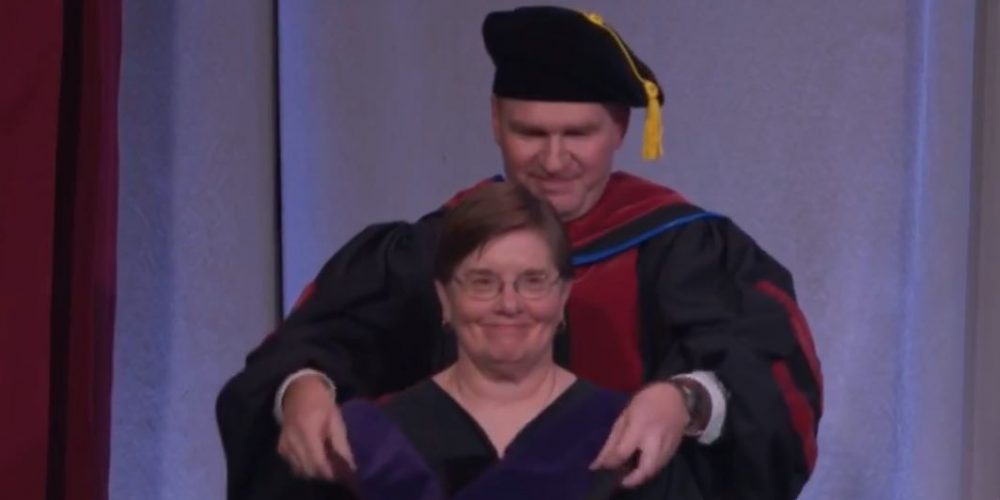 Among the more than 300 graduates at Aquinas College’s commencement ceremony on Saturday, May 5, Sister Maureen Geary, OP, prioress of the college’s founders, the Dominican Sisters ~ Grand Rapids, joyfully accepted her place among the Saints.

“Sr. Maureen so richly deserves this honor,” said fellow Aquinas trustee and Dominican Sister, Barbara Reid, OP. “She is a model of what Aquinas College stands for and has served tirelessly with her outstanding intellect, deep spirituality, and generous and humble service.”

The Board of Trustees granted Sister Maureen Geary an honorary Doctor of Laws degree. The honor recognizes her commitment to Aquinas College and the impact she has had on its students.

One such student, Nicholas Tarsa, with whom she worked closely on the presidential search committee, was excited to see her receive the honor, “I feel very fortunate to have had the opportunity to work with Sister Maureen. In our hours of conversation and deliberation with many personalities and ideas in the room, her voice and opinions always brought us together in pursuit of our goal. She always asked for a student’s opinion and never disregarded a perspective simply because it was not her own”.

Sister Maureen described what the honor means to her, “I am so profoundly honored to join the incredible legacy of Dominican Sister Saints—hundreds of Sisters who have graduated Aquinas and who so beautifully represent what is core to both the College and the Congregation: our deep commitment to prayer, service, learning, and community.”

Most recently as prioress, Sister Maureen has served on the leadership team of the Dominican Sisters ~ Grand Rapids for the past twelve years. In July, she begins her third term in leadership, as Councilor.

Prior to twelve years of service on the board of trustees for Aquinas College, Sister Maureen held roles on several committees and the Aquinas College Foundation board. Her Aquinas history also includes time as an assistant professor of business and vice president for finance.

Aquinas College was founded by the Dominican Sisters in 1886 and is the first Catholic co-educational college founded by women in the United States.

Sister Maureen believes the college continues to be a shining example of the Dominican charism and the Sisters’ years of hard work, “Aquinas is a standout, in education and in forming the leaders of tomorrow. I am very proud that Aquinas—our college—raises up our  leaders for today and I am prouder still to count myself among the Saints.”

Nicholas Tarsa feels equally grateful to be counted among the AQ Saints, “I could not have more respect for an individual than I do for Sister Maureen and I am so proud to be considered part of the same community that she is.”