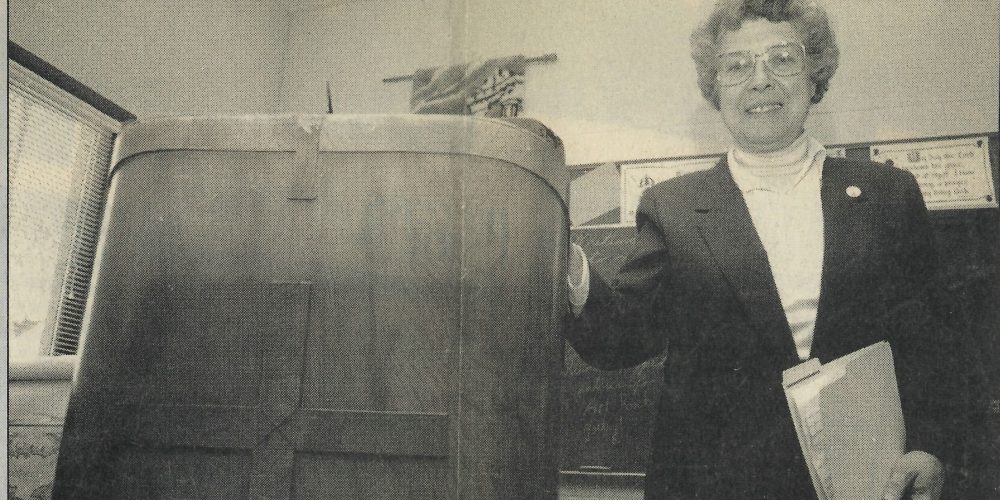 They are teaching tomorrow’s leaders today. And these dedicated educators are determined to make a difference. Years in the classroom have made them more innovative, more in touch with what really works — and more convinced that they can get results.

That was the lead in reporter Linda Gittleman’s article for the Morning Sun on Sunday, Feb. 25, 1995. Featured was veteran educator Thaddeus Kowalinski.

Now an English and Latin teacher at the high school, Sister Thaddeus has taught fourth through 12th grades for more than 40 years– but this is one teacher that likes to keep up to date.

She givers her students articles on David Letterman to read–with just one catch–they are in Latin.

She takes her Latin students to weekend conferences where they play quiz bowl games and pursue other academic contests. She gives them Latin drills on an IBM computer. And she teaches them not just Latin but tells her students about Roman times- the culture and the every day life.

“I thought, `What girl wants to read about Caesar all the time?'” she said.

If she had to choose between English and Latin, Sr. Thaddeus says couldn’t. “Latin is the basis for English and I have a great love of English,” she said. “Latin is the foundation of your culture and language. They go hand in hand.”

Keeping her age a secret, Sr. Thaddeus grew up in Grand Rapids and attended Catholic Central High school, where she earned mostly As.

Sr. Thaddeus joined the convent right out of high school and attended Aquinas College, the University of Michigan, and Central Michigan University.

St. Thaddeus, who “can’t stand doing the same thing for 45 minutes”, says she has seen changes in her students over the years.

“Students these days seem to handle technology better than previous students,” she said. “And the students are aas creative as yesterday’s students.” But they’re very grade conscious. I think the pressure is greater for them now.”

Teaching not just Catholics but non-Catholics as well, Sr. Thaddeus said when it comes to students, some things never change.

“The students need understanding,” she said. “They need to see order and discipline and they need to put it into their lives. I try to reach them to get organized and plan ahead.”

In order to do that, Sr. Thaddeus has developed some of her own little acronyms — and words to live by:

G.O. — Get organized.
L.T.D. — Listen to directions.
F.T.D. — Follow directions.
T.Y.T. — Take your time.
Focus on Locus — Just concentrate.
“You can’t learn Latin by osmosis.”
“Writing is an aid to memory and exactness.”

Sr. Thaddeus, who enjoys a good mystery and ice skating specials on TV, has also picked up a few other little nuggets of wisdom over the years. “Strong families and children accept responsibilities and this is carried over in the classroom.”

“A good teacher doesn’t stagnate.” I never teach the same way two years in a row.” And last but not least, one of her favorites: “You have to laugh when you make a mistake.”