The March Against Racial Injustice Continues 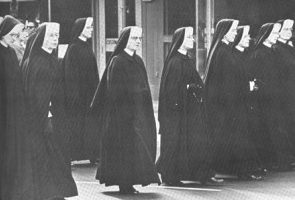 In 1964, Dominican Sisters ~ Grand Rapids, Aquinas students and many others marched for racial equality. The photo is from the 1964 Aquinas College Yearbook and depicts Sisters walking on Division Avenue in Grand Rapids, Michigan. The photo caption reads “The Dominican Sisters take part in a downtown racial protest march. A living testimony to the beliefs that they hold.”

The Sisters intentional contemplation of matters of racism and systemic injustice didn’t stop with the march in 1964.

The Leadership Team in 2015, affirming our 1999 Direction Statement on Racism, issued the following statement:

The Dominican Sisters of Grand Rapids condemn racism. Hate and discrimination diminish us all. We grieve with the citizens of Charlottesville and with all of us who are also harmed by racist words and actions anywhere. We mourn with those who have lost loved ones, with all who live in fear, and with all whose dignity is threatened by hate and violence.

The Dominican Sisters of Grand Rapids stand against harmful rhetoric and actions that result in fear and evoke hatred in our cities and neighborhoods. Racism afflicts our country. Any conversation or activity that contributes to division, hatred, violence, or disrespect of another human being hurts all of us as a human family. We pray that people relate to each other with dignity and respect.

We, as Dominican Sisters ~ Grand Rapids, see first the common ground of our humanity, and allow our differences only to enrich, and not to disparage. In all of our undertakings, we will notice first and foremost the human person before us. (DSGR Statement Against Racism 1999) Fast forward to last week when Brigid Clingman, OP, Grand Rapids Dominican Sister, joined about 120 participants — women religious and lay associates, nearly all serving as justice promoters or advocates within their congregations — at the biennial convocation of the Justice Conference of Women Religious in St. Louis, Missouri.

“This year, the gathering focused on systemic and institutionalized racism operating invisibly and insidiously, not only in U.S. society and in the Catholic Church, but also, leaders said, in virtually all of the religious congregations that proclaim justice as their mission,” wrote Global Sisters Report contributor Pamela Schaeffer in an article entitled: “‘Ouch’ moments discomfit, challenge sisters at convocation on racism”. Photo credit Pamela Schaeffer

Understanding and taking responsibility for historic attitudes and behaviors that have advanced rather than confronted racism is one purpose of a new social media campaign led by the Leadership Conference of Women Religious.According to LCWR, the “Standing Against Racism” campaign will feature women religious of color and messages that call upon all women religious to take responsibility for “our own complicity, and purging ourselves, our communities, and our country of the sin of racism and its destructive effects.”Facebook and Instagram posts will be published on Wednesdays April 3 through May 15. You can follow along with this campaign on the Dominican Sisters Facebook page.

In this day and age, we join with the Leadership Conference of Women Religious (LCWR) in raising awareness about systemic racism through a “Standing Against Racism” social media campaign. Facebook and Instagram posts will be published on Wednesdays April 3 through May 15. The campaign will feature women religious of color and messages that call upon all women religious to take responsibility for “our own complicity, and purging ourselves, our communities, and our country of the sin of racism and its destructive effects.”