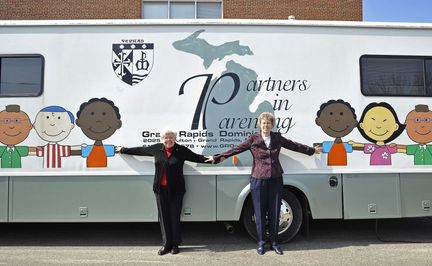 Sisters Marguerite Cool, left, and Jean Kramer stand in front of the Winnebago motor home they use for their Partners in Parenting program.GRAND RAPIDS — Quintarius Walls is determined to ditch the authoritarian, father-knows-best attitude he once relied on to raise his children.

The Grand Rapids resident says he is ready to stop the battle of wills that often pits him against three of his children, who range in age from 7 to 12.

Quintarius Walls said the parenting instructions he has been receiving from Partners in Parenting mentors have taught him better methods for raising his 6-month-old daughter, Brooklyn, and his other three children, not pictured.And he vows to pursue a different path with his fourth child, a 6-month-old girl named Brooklyn.
“I had to let go of some ways I had,” said Walls, 34. “It was always, ‘It’s my way or the highway’ because I’m older. I know what’s best.”