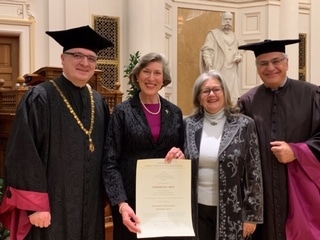 On Tuesday, December 10, 2019, Sr. Barbara Reid, OP, was awarded an honorary doctorate from the University of Graz in Austria for her pioneering work in feminist biblical studies. Her role in creation of the Wisdom Commentary series was especially noted. Of the first 16 volumes published in this series, seven have won awards from the Catholic Press Association and the Association of Catholic Publishers.

Sr. Barbara Reid is a Dominican Sister of Grand Rapids, Michigan, and has been a member of the faculty of Catholic Theological Union since 1988 where she also served as Vice President and Academic Dean.

The University of Graz was founded in Graz, Austria in 1585. In 1995, the institution inaugurated a Women’s and Gender Studies Program. In 202, 2ith the 25th Anniversary of the program, its director wanted to honor the milestone by celebrating a pioneering feminist scholar.

Sr. Barbara graciously accepted the doctorate on behalf of all feminist biblical scholars. In her remarks, Sr. Barbara reflected on the advances that have been made in recent decades for women while noting the challenges that remain. She noted in her remarks, “Feminist scholars, like myself and those in your Catholic Theological Faculty who work in the Program of Women and Gender Studies are trying to address these root causes [of gender inequality], each in our own context. In my area, feminist scholars of theology and biblical studies are continuing to forge new ways of understanding our Scriptures and tradition that challenge whatever attitudes and interpretations fuel sexism, clericalism, and patriarchal cultures. Feminist biblical scholars now do far more than lift up overlooked and forgotten women in the text. Today we bring feminist lenses to every portion of the text, asking both where were the women in the time the text was formulated and how did they appropriate it as well as how does the text offer life to the full for women and men today in their various contexts.”

Reid Presents Paper at Symposium: “A World Birthed Anew and the Role of Feminist Biblical Interpretation”

The investiture was accompanied by a Symposium at which Sr. Barbara presented the principal paper entitled, “A World Birthed Anew and the Role of Feminist Biblical Interpretation.” This event marked the 25th anniversary of the establishment of women’s and gender studies in the Catholic Theological Faculty at the University of Graz.

The Rector of the University, Dr. Martin Polaschek remarked, “By awarding the honorary doctorate in theology, the University of Graz honors the pioneering work of Prof. Barbara Reid for the gender-sensitive interpretation of the Old and New Testaments.”

Professor Christoph Heil, Dean of the University’s Faculty of Catholic Theology, noted, “With the rationale of the Wisdom Commentary series, Prof. Reid has set a milestone in feminist biblical interpretation.”

If you are you hungry to explore new interpretations of familiar scriptural texts – interpretations that draw on women’s wisdom and a way of life that promotes equal dignity and value for women and men alike, don’t miss biblical scholar, author, and Grand Rapids Dominican Sister Barbara Reid’s upcoming visit to Dominican Center at Marywood on March 21, 2020.  Women Wisdom with Barbara Reid

Volume on Genesis is next is Wisdom Commentary Series

The Wisdom Commentary series is published by the Liturgical Press wisdomcommentary.org. Dr. Fischer is the author of the forthcoming volume on Genesis. Nineteen of 58 projected volumes are already available.

Sr. Barbara Reid, OP receives an honorary degree from the University of Graz