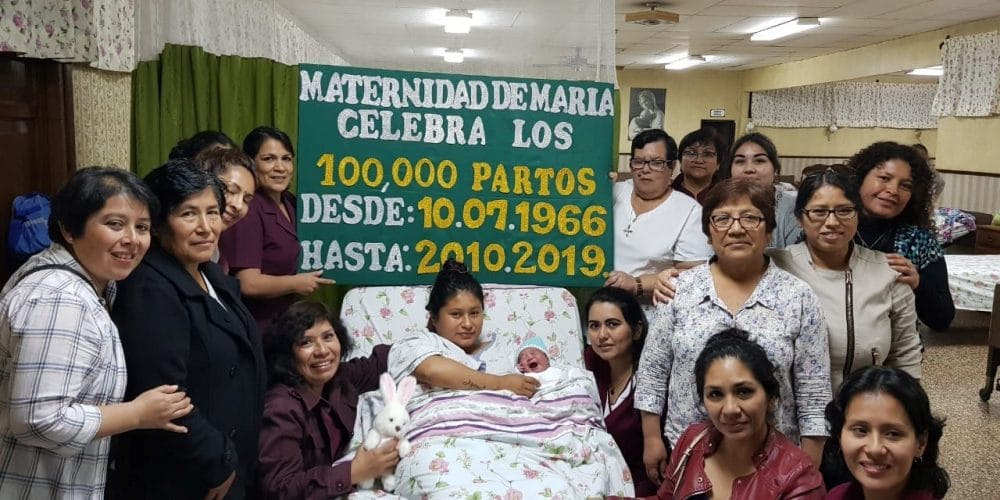 We are delighted to announce the 100,000th baby was delivered with the compassionate assistance and care from the professional midwives and nurses at Maternidad de Maria in Chimbote Peru!

According to Sr. Margaret Mary Birchmeier, the baby boy was born on Sunday at 6:35 pm, weighing 7 lbs. 7 oz. Mother Sumiko and father Lazaro welcomed baby Anderson amidst joy and celebration.

“This is a big occasion, very exciting for the Center and for all who have worked here,” says Sr. Margaret Mary. “We were praying for a safe and healthy birth and baby, and everything went perfectly well. Mother and baby are healthy.

“We are already on our way to our 200,000th baby!” Five more babies were delivered since Sunday.” Dominican Sisters~Grand Rapids Margaret Mary Birchmeier Lillian Bockheim minister at the maternity hospital they help operate in Chimbote Peru. Here they are shown with a beautiful marble sculpture of a mother and child. The sculpture welcomes all who visit Maternidad de Maria and Posta Medica Wellness Clinic, Laboratory and Pharmacy.

Sisters Margaret Mary has lived and ministered to the people in Chimbote since 1965. Lillian Bockheim

They are currently in the United States. They departed the Motherhouse of the Dominican Sisters~Grand Rapids to gather with friends in Pittsburgh, headquarters of The Chimbote Foundation. created The Chimbote Foundation was created to provide a bridge of love, hope, faith and financial support to care for the poorest of the poor in Chimbote through the Center for Social Works – a maternity hospital, outpatient clinic, clinical laboratory, pharmacy and home for abandoned and neglected children – serving hundreds of thousands since the mid-1960s.

Sisters Margaret Mary and Lillian join with partners who continue to grow and sustain this ministry through  prayers and financial support.

In the early 1960s, while Monsignor Jules Roos was serving in Chimbote, he found himself baptizing far too many babies who were brought to him near death. He quickly realized the root of the problem was unsanitary home birthing conditions that were common in this poverty-stricken desert town – to the point where rats ran up the legs of the midwives and nurses as they provided birthing services in the straw homes.

In 1966, Monsignor Roos decided to open a life-saving maternity hospital where mothers could give birth in clean and comfortable surroundings. It was an enormous undertaking. But, with the help of the Dominican Sisters of Grand Rapids, he was able to make the hospital a reality.

The first facility was very humble and primitive by today’s standards. But, it flourished and grew into the bustling Maternidad de Maria hospital in Chimbote, well-known and well-respected throughout Peru. The hospital building was destroyed in a catastrophic earthquake in 1970, but was rebuilt over the next decade thanks to the persistence of the mission leaders and their partners in Pittsburgh.