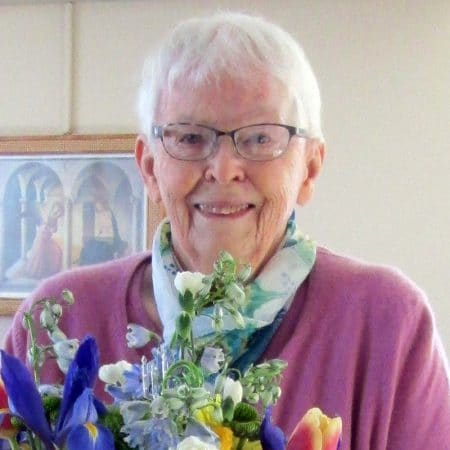 God gave the heart a voice to sound its joy and called it Music.

Essexville, Michigan was my birthplace in 1927. My baptism was extremely important to my parents as well as a Catholic education at home and at St. John’s School.

From my earliest memories, my mother sang with my sisters and me as we went from place to place in our car. In 1939, Sister Leone came to Essexville where she formed a group of students who wanted to sing. She often gathered us on Saturday afternoons to listen to Opera. When Sister Arlene arrived in 1942, we were prepared to sing for Sunday Mass. We later sang for special occasions at the public school since we had no other facilities at the Parish.

During my Junior year in high school, along with a few other girls, we made our BIG trip to Grand Rapids to attend Sister Villana’s Reception of the Habit ceremony. As impressive as it was, it held no great importance to me until the following year when we attended her Profession of Vows. It prompted my first awakening to the thought of religious life. Since September, 1945 my life has centered around education, parish ministry, and volunteer work.

Coming to Marywood in 1945, my interest in music had already been formed. Since 1948, whenever I was in parishes and an organist was needed, it became my privilege to play for daily Masses.

Also engaging with young people who loved to sing and with adults interested in being choir members, much of my life has been centered in praising God and making music a vital part of my being. Music in the next world will be Heavenly!

My life has been filled with many blessings and wonderful friends during my entire life. Prayerful support by Community, relatives and friends have encouraged me over these seven decades. My grateful thanks to God and to all for your support and love.

Pray for homeless who are hopeless

Always learning, Sister Mary Lee wouldn’t miss an opportunity and encourage everybody to keep learning. Here she is touring the grounds of Marywood in Grand Rapids on Earth Day.