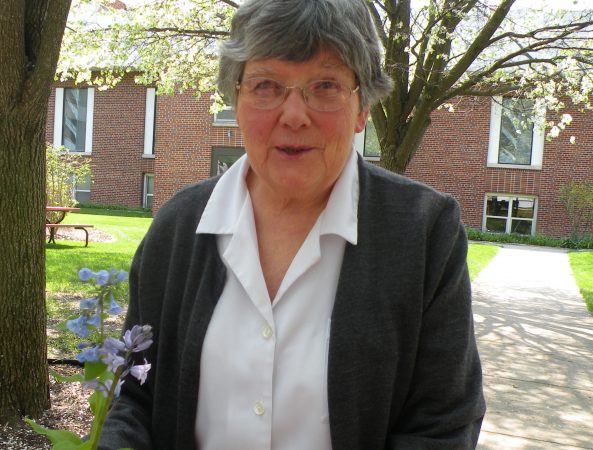 The combination of the spiritual, communal, social and professional aspects of my life has provided a life of growth, happiness and contentment.

Jean Anita Williams, born October 29, 1941 in Detroit, Michigan, was the eleventh child of Catherine and James Williams. Jean entered the Dominican community from St. Sebastian of Byron Center in 1959 receiving the name Sister Jean Mary of the Blessed Sacrament in 1960. She wrote that, “The choice to become a Grand Rapids Dominican Sister was made during a retreat given at Marywood my senior year.”

Sister Jean attended Aquinas College and in 1964 received a Bachelor’s Degree majoring in History with minors in English and French. She received a permanent elementary teaching certificate in 1968.

For almost twenty years, Sister Jean taught elementary school children and religious education in Michigan cities: Grand Rapids, Hart, Munger, West Branch, Muskegon, and Coopersville. She was also the Director of Religious Education at Guardian Angels Parish in Manistee from 1982-1991 and Coordinator of Christian Formation at St. Patrick Parish in Traverse City from 1994-2001. In 2001, Sister Jean accepted the position of Dominican Associate Director—a position she held through 2007. She then began working as a tutor for the Literacy Program that is sponsored by the Dominican Sisters ~ Grand Rapids.

Each and every day, Sr. Jean serves the community as a sous chef, teaming up with the food service staff at Marywood, to provide meals to Sisters and employees.

Pray for the unemployed