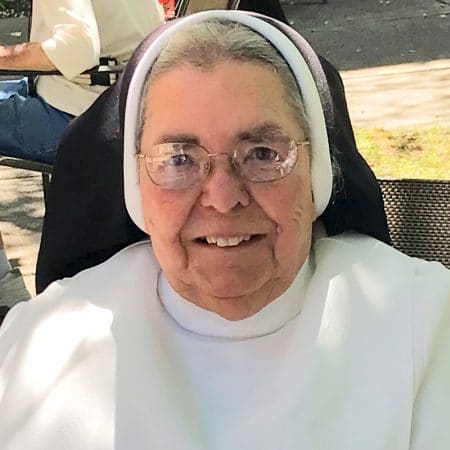 “Seek first the Kingdom of God and His Justice and all else will be given to you. All things work together unto good for those who love God.”

Born in Lake Leelanau, Michigan on August 4, 1932, Irma Lucille was the second of eleven children for Genevieve and Leo Schaub. Irma attended both public and Catholic schools until she completed the tenth grade. She entered the Grand Rapids Dominicans in 1950 and received the name Sister Geneva Marie of the Sacred Heart.

While working in food service she continued her education. She then became Chaplain at Heritage Hospital in Taylor, MI. She also ministered to the homebound, taught religious education and RCIA. She started “Rainbows For All God’s Children” and a grief support group before going to Hannah. In Hannah, she became Director of Religious Education, Pastoral Associate, Youth Group, RCIA and the Homebound.

Sister left active ministry for the Health Center where she continued writing icons and then became Spiritual Assistant to the Dominican Laity of Western Michigan’s Rosary Chapter. She now resides at Aquinata Hall and is in the Prayer Ministry.

Pray for Bishops, Priests, and Religious

Sister Geneva Marie helps to facilitate art throughout the community.

Sr. Geneva Marie considered it a special act of service to mend rosaries for Sisters and lay people. For many years, she also made new rosaries as gifts for births and weddings. As of January 2021, she has passed her mending kit on to Sr. Maxine Plamondon.