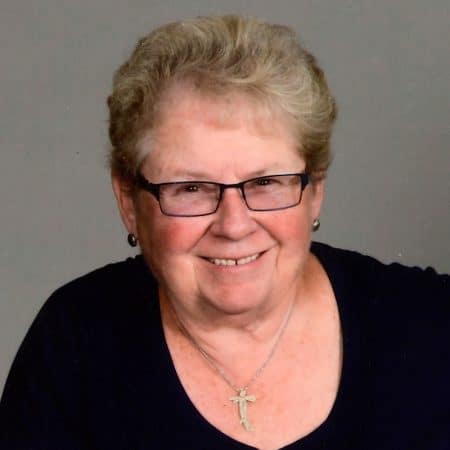 To serve the Lord is my delight.

“Veni, vidi, vici. I came, I saw, I conquered.” When I told my parents I wanted to be a Sister, my mother was quick to respond, “You’ll never last. You’ll be home in a month.” She thought I was too wild to be a Sister. With every visiting day as a postulant and novice, I waited to be sent home. As you see, it never happened!

Born in Saginaw on April 10, 1942, Georgi Ann was the first of seven children of Clare Anthony and Marie Antoinette Herald. She was influenced by the Dominicans, going to school at St. Josaphat in Saginaw and later to Marywood Academy in Grand Rapids. Georgi first encountered the Dominican Sisters when in third grade at St. Josaphat School and knew immediately that’s what she wanted to be “when I grew up.”

Georgi entered the community in 1960, and as a novice received the name of Sister Ann Christopher. Sister Chris (as she is known) earned her BA in Biology from Aquinas College, and an MA in Microbiology from Kansas State College. She studied microbiology for two additional years at Michigan State University. A few years later she earned a Masters in Pastoral Theology from St. Mary of the Woods College, Terre Haute, Indiana.

Although Sister Chris’ ministry has included teaching grade and high school math and science, a few years as a professional student, serving the Dominican Sisters as Director of Retirement and Preretirement for six years, she found her true ‘home’ in pastoral ministry and parish administration. Primarily ministering in northern Michigan, Sister Chris has been an associate pastor in parishes at Kalkaska and St. Ignace. For the past 34 years she has served as Pastoral Administrator of St. Hubert’s in Higgins Lake, St. James in Houghton Lake and now St. Anthony of Padua in Mackinaw City where she relishes her view of the Mighty Mac – the bridge that joins the two peninsulas of Michigan.

These years have been most demanding, exciting, and rewarding. This ministry has allowed her to build buildings, give direction to a myriad of projects, use her creativity wisely, challenged her to learn new skills, and the greatest gift of all… to be one with the people in the pews! “I am blessed to share in their deepest sorrows and their most joyous moments. So many have become friends for life. I would not change these years for anything,” says Sr. Chris.

At the time of her 50th jubilee, she reflected on the scripture passage: “I have put my hand to the plow and never looked back.” Now at her 60th jubilee, these words ring through her heart: “‘To serve the Lord is my delight.’ The generosity of God cannot be outdone. God has been abundantly generous to me. Amen.”

Pray for women in church ministry

Sister Chris is in parish ministry in Mackinaw City.

Sister Chris welcomes Catholics and other visitors from all over the world to St. Anthony of Padua in Mackinaw City, Michigan.