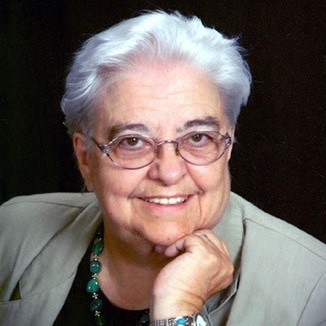 I set before you life and death. Choose life!

Mary Brigid, born in Chicago on November 12, 1942, was the first of seven children for Lewis and Dorothy Clingman. The family moved to Grand Rapids in 1946. In 1960 she entered the congregation, received the name Sister Robert Louise of the Holy Family and later returning to her baptismal name.

Deeply interested in justice and social equality issues, she pursued and received a BA in Sociology at Aquinas. She then taught junior high school in New Mexico and Michigan before moving on to her original passion—social work. She obtained an MA in Social Work at Western Michigan University and a Masters in Religious Education at Aquinas Institute for Religious Studies.

With the ministry of social work with children separated from their parents in foster care as well as children in detention for real or alleged crimes, the painful realities of how little our society cares for the most vulnerable among us has been an empowering call for Sister Brigid to be engaged in a ministry of justice, advocacy, and encounter.

After working six years for Catholic Social Services in Grand Rapids, she served for sixteen years in Detroit. She later became director of the Team for Justice of the Archdiocese and worked with Wayne County Youth Home and Wayne County Jail.

In 2000 Sister Mary Brigid served as Councilor for Mission and Advocacy on the congregational ministry team. Upon completion of her term, she became Pastoral Associate at Our Lady of the Lake in Holland, Michigan. In her spare time, she enjoys listening to choral and folk music, working with youth ministry and reading historical novels.

This is the day the Lord has made! Let us rejoice and be glad in it.

Yet another year has passed and a “new” group of Jubilarians proclaims their faithfulness for the way of life chosen when most of us were standing on the cusp of adolescence and adulthood. Whether there was fervent piety in our decisions or faith in a deep mystery unfolding, we made a leap of faith and said “Yes Lord!” That was a day when the Father danced with joy and called us each anew to enter into the dancing and rejoicing.

Thousands of days have come and gone. They have been marked with laughter and tears, embracing and solitude, confidence and fear. If each day was not a day of rejoicing and gladness, each day was an act of faith and fidelity. The journey of that faith and fidelity with our companions along the way, tells us that we live always in God’s day of the dance which was made for each of us. We always then live in the rejoicing and gladness of God’s love for us and our love for one another.

Pray for lifers in the prison system

Death Penalty demonstration at the Supreme Court in Washington.

Sr Brigid joined Sisters and Associates to introduce Laudato Si’ Care for Our Common Home and teaching resources for all ages at the Diocese of Grand Rapids Catechetical Conference.

Things You Can Do to Help Migrants and Asylees in Detention on the U.S.-Mexico Border

Creation Care as an Act of Radical Hospitality, Season of Creation 2021

Going Where Help is Needed: Support at the U.S. Border and Beyond

October: Invitation to Justice Action for Restoration of Asylum Protections

Study: Call to Justice Dominican Responses Through the Ages

Catholics Care About Climate Change: Beyond a Throwaway Culture

Care of Creation Committee: Commit to Use Less Plastic

Dominicans Support “March for Our Lives” Call for Gun Control

Pray for the End of Human Trafficking

The March Against Racial Injustice Continues

“Justice” is a Ministry of the Dominican Sisters~Grand Rapids

December is Month of Peace: Dominicans In Solidarity for the Congo

Dominican Study: Response to Genocide in the New World with Brigid Clingman, OP