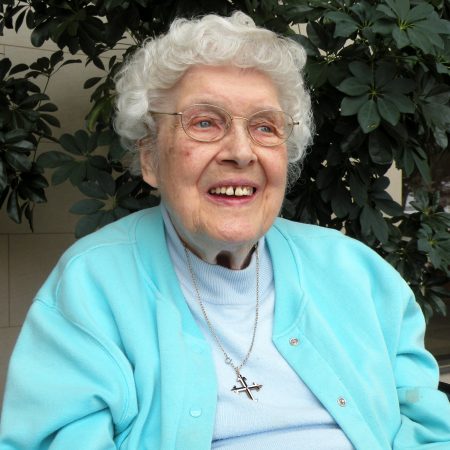 On August 25, 1929, Emily Michaelina was born to Josephine Bakowski and Felix Kowalinski on the west side of Grand Rapids. They soon had their daughter baptized at St. Mary’s Parish and along with an older brother and sister and soon to be younger sister the family enjoyed a happy, love-filled home. The children were close and remained so in their adult years. Religion was an important part of family life along with an emphasis on the importance of education. Young Emily went to Harrison Park School for first and second grades, and then transferred to SS. Peter and Paul for the remainder of her elementary years. When she was eleven years old, her father died; family circumstances then necessitated a move to St. Isidore parish on the east side of town.

Entering Catholic Central for high school brought Emily in close contact with the Dominican Sisters for the first time. She found them “fair and just, warm and friendly, concerned and outgoing towards their students.” After graduating in the spring of 1947, she entered the congregation in September. On March 3, 1948 she received the habit and the name of Sister Mary Thaddeus of the Child Jesus. First profession followed the next year and her final profession was made on August 15, 1952.

Sister Thaddeus’ long teaching career began at SS. Peter and Paul in Saginaw where she taught fourth grade. Later assignments took her to St. Thomas, Grand Rapids; Our Lady, Chesaning; Sacred Heart, Mount Pleasant; St. Joseph’s, Bay City; and St. Mary’s, Gaylord. In many of these places she was also principal and/or superior. From 1972 to 1976 she was a member of the General Council for the Congregation.

Sister Thaddeus completed her undergraduate education at Aquinas College, majoring in both History and English. She furthered her education at the University of Michigan with a major in the Latin language. Thereafter, she taught at the high school level, usually Latin and English.

Her outstanding service in education was perhaps climaxed with her success in teaching Latin. She kept the subject alive and thriving at Sacred Heart Academy in Mount Pleasant long after it had been dropped from the curriculum elsewhere. Roman banquets, attendance at state and national meetings, and other cultural events kept up the students’ interest while Sister herself regularly attended professional meetings and did professional reading on the subject of the Latin language and Roman culture. The students at Sacred Heart Academy were so appreciative of her that they elected her the Grand Marshall of their homecoming parade in October 1997. Upon her retirement they honored her with an acknowledgment of “bene” (well-done) for her work with them and “optime” (the highest mark) for her dedicated service and kindness to them over the years.

A trip with Sister Henry Suso Lerczak to Europe, including Poland, not only was a great cultural experience, but also brought contact with family members known previously only in stories and letters. A humanities seminar at Kalamazoo College and a National Endowment for the Humanities Seminar were enriching experiences and an affirmation of the quality of her teaching.

Sister Thaddeus will be remembered for her ready smile and wonderful balance in her life. Ever the knowledgeable academic, she also used her gifts in the homey arts of sewing, cooking, and baking for the pleasure and service of others. Affable and adventurous, she was never one to pass up an opportunity to go on a picnic, take a walk or enjoy a day of fun with friends.

Besides feeding the bodies and minds of others, Sister Thaddeus also nurtured their souls. Her calmness and strength struck one at even a casual encounter. Her deep faith, her gracious goodness, her prayerful concern was poured out on her family, her Sisters, her students, and others with whom she came into contact. “Each day has brought new experiences and each year new challenges. I give thanks for each day, each year,” was Sister’s own comment on her life.

Her positive outlook accounts for the lively joy and contentment that seemed to always bubble beneath her calm surface. In trying circumstances. she would say, “This too shall pass away.” Thus, she maintained her calm demeanor through her own hills and valleys of ninety years of living and loving God and all she met along the way.

We commend Sister Thaddeus to your prayers.

Pray for needs of children and youth

In the summer, you could often find Sr. Thaddeus helping outside in the garden at Aquinata Hall.

Born and baptized Emily Michaelina Kowalinski in 1929, she received the habit and the name Sister Thaddeus of the Child Jesus upon her reception to the Dominican Sisters~Grand Rapids and the worldwide Dominican Order of Preachers in 1947.

Sister Thaddeus pursuits in learning included a BA from Aquinas College and a Masters in Latin/Classical Studies from the University of Michigan. She would teach children and youth in Catholic schools in Saginaw, Grand Rapids, Gaylord, Bay City, Chesaning, and Mount Pleasant.

First as an elementary teacher, then as a high school teacher of Latin, English, and homemaking, and later as an administrator of schools, Sr. Thaddeus’ found delight in engaging the minds of young Americans. Here, Sr. Thaddeus works with a student on Latin drills at Sacred Heart, Mt. Pleasant, Michigan in 1994.

Sr. Thaddeus had been a gifted seamstress most of her life. Her attention to detail and joy for the craft was most recently been shared with children at D.A. Blodgett-St. John. She helped make dolls that are gifted to children to calm them during times of transition.