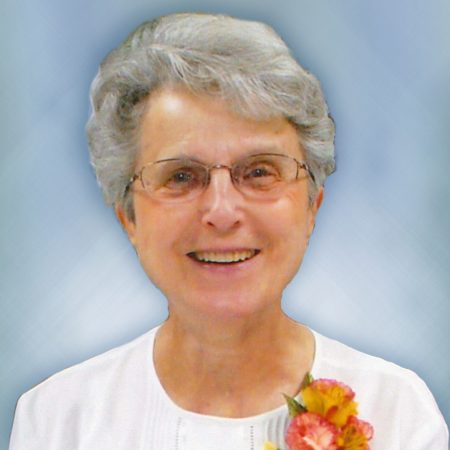 This is what Yahweh asks: to act justly, to love tenderly, and to walk humbly with God.
-Micah 6

On Independence Day, 1929, Wencel and Ludmilla Kolarik Korson of Gill’s Pier, Michigan became parents of twin girls, Theresa Marie and Mary Lucille, who together weighed just seven pounds. Thinking they could not survive, their mother baptized them immediately. With the tender care of their parents they did live, and along with their six brothers and four sisters grew up on a farm on the beautiful Leelanau Peninsula.

Mary and her siblings spent much of their early life helping on the family farm, hoeing the garden, picking cherries, and harvesting potatoes. On Sunday afternoons they played baseball, having enough members in the family for two teams. For the first ten years of schooling, Mary was educated in a public school, but the dream of attending a Catholic school was never far away. Then in 1947 five Korsons enrolled at St. Mary’s High School, Lake Leelanau, where the Grand Rapids Dominicans taught. Here Mary began to experience the call to enter religious life. In November of that same year, Mary confided in her mother the desire to become a Sister. Her mother was very pleased, but also wanted to make sure it was what Mary really wanted.

Within a few weeks, on December 14, 1947, their mother died unexpectedly. Surrounded by her family, she admonished her children with these words: “Be good to your father and be good to one another.” Helen, the oldest daughter, became a second mother to her siblings.

After graduation in 1948, Mary entered the congregation at Marywood. At reception she took the name of Sister Mary Lydia of the Infant Jesus of Prague. Within two years, Sr. Lydia’s twin, Theresa, and another sister, Rose Marie, joined the community, taking the names Sr. David Therese, and Sr. Peter Mary.

After her first profession of vows, Sr. Lydia heard the call: Go ye and teach all nations. Matt 28:19 Then began a life of study and teaching for the next fifty-one years.

After completing a BA at Aquinas College, Sr. Lydia’s education was furthered by completing an MA in Elementary Education at Central Michigan University in Mt. Pleasant.

Sister Lydia earned the respect and affection of colleagues and parents alike. In spring 1978 she announced that she would be leaving St. Mary’s, Belen, where she was principal. The Valencia County News-Bulletin published an article praising her accomplishments there. When she took over the principalship, the school was about to close. She recruited a certified and qualified staff and increased the enrollment. With the help of parishioners and volunteers she improved the playground and its equipment as well as the interior and exterior of the school. By the time she left, the school was thriving again.

Years later when Sister Lydia was preparing to leave the Ludington Area Catholic School, she received a mock-serious letter from the Sheriff of Mason County, ordering her to remain as principal and threatening serious consequences for the community if she failed to comply, e.g., loss of friendly smiles, sadness among friends and acquaintances, etc. The summons continued, “All kidding aside, we certainly hope you will reconsider your decision to leave LAC as we feel that you have done a tremendous job at the school and your absence would truly be a loss to the community.” This was accompanied by a petition with 117 signatures urging her to remain. Sister Lydia stayed in Ludington for three more years.

Sr. Lydia’s philosophy of education can be summed up in her own words: “The goal of preparing students spiritually, academically, physically and socially is truly a team effort and is accomplished by a caring and dedicated staff who recognize and respond to the individual needs of students.”

After retiring from the field of education, Sr. Lydia moved to Marywood where she served as Common Life Coordinator to the Sisters at the Marywood Health Center. She was an excellent seamstress spending hours sewing and mending articles of clothing for the Sisters who were in need of these services.

Cheerful, meticulous, energetic, Sr. Lydia fulfilled her vocation as a Dominican Sister with complete self-giving. She epitomized the aspiration of one of her favorite writers, Dag Hammarskjöld when he said: To be free, to be able to stand up and leave everything behind without looking back—to say yes.

We will miss her smile, her energy and kind ways even as we who knew her are assured that she is in the embrace of her tender, all loving God.

We commend Sister Lydia to your prayers.

Pray for Sisters at home and on foreign missions

Sister Lydia serves as Common Life Coordinator at Marywood Health Center, supporting worship in the Chapel of the Word.

In her role at Marywood Health Center as Common Life Coordinator, Sr. Lydia often experiences being in the presence of holy women.

Pictured is Sr. Lydia out for a stroll with Sr. Rose Miriam Visner†.

A Blessing for You on this Saturday After Thanksgiving