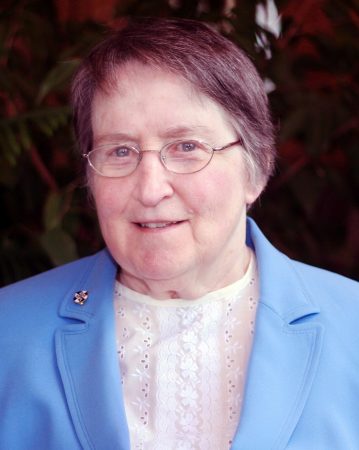 “My dream is that there will be true peace in each person in the community; that we can live in harmony and look at the good in each one and be willing to praise and accept each one as they are, to believe in them and to trust them.”

This wish, written at the time of Sister William Mary’s Silver Jubilee, demonstrates also the exuberance with which she expressed herself. Her heartfelt desire for peace and harmony is also the natural outcome of a life lived well in a loving family touched by the stark realism of an early tragedy.

Rose Mary Conway, the seventh and last child among two boys and five girls born to William Hugh and Blanche Mary Durand Conway, was born July 11, 1934 in the Irish Hills of Watson near Allegan, Michigan. Two of her older sisters attended Marywood Academy as aspirants in their high school years. In 1940 her father suffered a stroke and died after a brief time of paralysis. This early death, when Rose Mary was only five years old, had the effect of galvanizing the family as a unit of resourcefulness and abiding love for one another.

After William’s death the family survived on the produce from a small farm, kitchen garden and a cow, along with a $9.00 per month government check. Then in 1944, the family moved to Allegan where Rose Mary completed her grade school education. She followed her sisters Rita and Mary to Marywood and became an Aspirant for her high school years at Marywood Academy, from which she graduated in 1952.

On September 1, 1952, Rose Mary entered the Postulancy accompanied by another older sister, Bernardean (Sister Magdalena). Upon entering the Congregation they joined their sister, Rita – who was now Sister Carmella. At Reception, Rose Mary took the name of Sister William Mary of Our Lady of Sorrows.

For many years Sister William Mary taught in primary grades, beginning at St. Michael School, Maple Grove; and continuing at Blessed Sacrament, Grand Rapids; St. Peter, Douglas; St. Mary Magdalen, Melvindale; St. Norbert, Munger; St. Mary, Muskegon; then back to Grand Rapids to teach at St. Andrew, Marywood Academy, and Immaculate Heart of Mary and finally at St. Joseph, Wright. During these years she completed work on her B.A. from Aquinas College and earned an M.A. in elementary education from Michigan State University. Later she took classes in Workshop Way® at Xavier University, New Orleans and gained certification and a license as a consultant in the Workshop Way® method.

In 1983 Sister William Mary moved to New Orleans as curriculum coordinator of Workshop Way®. For nine years she worked closely with the founder, Sister Grace Pilon, SBS. She edited books, created materials, and taught courses and workshops throughout the United States.

Prompted by the critical illness of Sister Magdalena as well as the retirement of Sister Grace Pilon, Sister William Mary returned to Michigan as an elementary teacher at St. Joseph, Wright in 1992. She took over the classes that Sister Magdalena would have taught. In 2001 her class of 18 first and second graders placed second in a national Scholastic Book Club contest to promote reading.

“Willie,” as she was affectionately called by her Dominican Sisters, was a diminutive bundle of energy, outgoing, enthusiastic, and eager to help others. She liked working with children. She enjoyed sewing and fancy work. Her love for New Orleans was shown annually when she distributed Mardi Gras beads at Area meetings. She loved life and she especially loved her life as a Dominican. In her later years she wrote: “I am happy I became a Dominican Sister. I have taught in all places and lived in all sizes of convents. My only accomplishment is that of a primary school teacher. I have loved teaching and I love children.”

Her life was a life of loving – God, family, friends, children in her classroom. One is reminded of the words of Julian of Norwich: “I desired to know what was our Lord’s meaning. I was answered: Know it well, love was His meaning. Who reveals it to you? Love. What did He reveal to you? Love. Why does He reveal it to you? For love. Remain in this, and you will know more of the same. But you will never know different, without end.”

And so it is with Sister William Mary Conway – in love is the meaning of a life well lived. She will be greatly missed.

Sister William Mary is survived by her sister, Sister Carmella Conway, OP; nieces and nephews, many friends and members of her Dominican community.

We commend Sister William Mary to your prayers.

Sister William Mary in a classroom at Marywood Academy in 1977.

Workshop Way is a system of education that leaves nothing to chance, and it is an approach to learning which provides equal opportunities for all students to learn how to learn, how to think, and how to manage their lives. It helps students develop decision-making capacities and critical thinking skills.