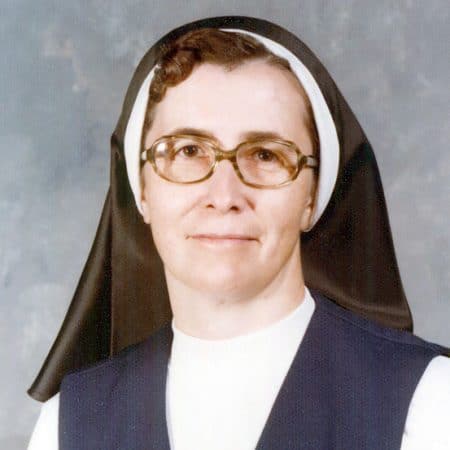 Although Sister Viola Marie was only 57, death did not come as a surprise for her. For the last three and a half years, she had known she had cancer, and she was putting up a brave fight. Like St. Paul she kept the faith, and early in the morning of June 18 she finished “the race”, surrounded by many of her brothers and sisters and Dominican family.

Alberta Henige was born on January 24, 1927, the third of nine children born to Mary and Edward Henige. She attended grade and high school at St. Michael’s in Maple Grove. It was on her first communion day, after her pastor had said that it was at that time for him that he decided to become a priest, that Alberta thought of one day teaching religion in a Catholic school. But she never dreamed that her thoughts at that age would come true.

Upon graduation from high school, Alberta entered the community of Dominican Sisters in Grand Rapids in September 1945. In March of the following year she received the habit and the name Sister Viola Marie of the Immaculate Conception. Her next 35 years were spent in fulfilling her childhood dream of teaching religion, for she taught in the elementary grades in many schools throughout Michigan. In 1982, she served the Sisters at St. Francis in Traverse City as food director.

It was in December of 1980 that she underwent her first surgery for cancer, but she continued her teaching and service to the Sisters – in face to the very end. During her last months she ministered at both Marywood and Aquinata not only by projects such as sewing gifts for Christmas but also, and perhaps most importantly, by her acceptance of her illness and her openness to her family and community about her illness and the manner in which she learned to accept her dependency upon others.

Quoting from what Sister Viola Marie wrote this past year: “In my Dominican life I have appreciated the sharing and support given, especially when the going was rough. I thank God for those who have shared life with me in any way.” We, in turn, thank the Lord for letting Sister Viola Marie share nearly forty years of religious life with this Dominican Community. To paraphrase one of her favorite scripture passages: blessed be the Lord, her rock, her stronghold; may He now be her deliverer.

We commend Sister Viola Marie to your prayers.