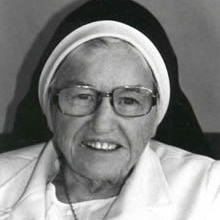 “I shall pass this way but once” – so it would seem to Sister Thomas More in the succeeding days and years that followed that September day in 1934, when as Dorothy Connolly she passed through those formidable front doors of Marywood. Her mentor, Sister Fabian MacDonald, read aloud to her novices The Wizard of Oz. Like another Dorothy, Dorothy Connolly would skip along her own yellow brick road full of excitement and challenges around every winding curve. She was born of Irish stock that knew no turning back, until she would reach her goal, the City of God. The passage traversed the country, the hills of northern New Mexico, big and little Michigan towns and countrysides, to pause in the noisy bustle of bursting classrooms, in the dauntless pursuits of study, and in the gentler havens of prayer – a colorful patchwork it would take a lifetime to complete. Something of the dry humor of her new patron saint became her trademark in the ready wit that met each turn of events.

In the quiet town of Merrill, Michigan, Francis and Edna Burns Connolly welcomed their fifth child on August 5, 1914, and named her Catherine Dorothy. Fortified with two strong patron saints, they presented her for baptism in Sacred Heart Parish, August 23rd, and thereafter surrounded her with the loving support of ten brothers and sisters. After the family moved to Dearborn, Michigan, Dorothy was educated by the Immaculate Heart of Mary Sisters teaching at another Sacred Heart parish. It was the subtle influence, however, of Sister Eugenia Connolly, her father’s sister, that eventually guided her to our door. If, on occasion her courage faltered, there was always the recurrent familiar quotation “What does it profit… to gain the whole world… and suffer the loss of one’s soul?” Deeper than this was that persistent tugging call.

Having spent her postulant year trudging back and forth to Catholic Junior College, Dorothy became Sister Thomas More of the Blessed Sacrament, when she received the Dominican habit from Mother Eveline Mackey on August 23, 1935. Her canonical novitiate year was followed by another year of study before she made her First Profession on August 5, 1937. The mountains of New Mexico near Penasco and Santa Cruz became her testing ground before she sealed her covenant in Final Profession on August 5, 1940. So began her initiation into the preaching world of Dominic. She would pursue its ideal across the country until 1989 – a trek of 52 cross-country years along varied and challenging paths. Blessed with a good mind and a more determined will plus a heritage of Irish spunk, she met each new group of learners with vitality and freshness. The convincing smile and set jaw said, “We’ll do this – together!”

A spirit such as hers was designed for the extraordinary and for survival with grace. During the early evening of Palm Sunday 1963, the quiet community of Alpine was ripped with the force of a destructive tornado. Sister Thomas More was superior and principal. She and the other Sisters were ready to enjoy a relaxing Sunday evening before the next week’s work. With no forewarning and in a matter of seconds, all about them – the school, the fairly new church, the rectory, the pump house, and the still-standing old convent – was leveled. The Sisters in their mildly disturbed new convent were unharmed, but their first concern was for others in the chaos around them. In his rectory, Father Hoogterp was surprised with a door falling upon him, ironically saving him from falling bricks. In shock, he went to the convent, and then to the church basement, where he found the Sisters. Their first thought was to get him to a hospital. While all around was devastation, homes destroyed, orchards uprooted, and the cemetery torn up, no Alpine lives were lost. Service was first and foremost. Outside help was prompt. True to form, Mother Victor sent Father Wilson and Father Kaufman out to take care of the Blessed Sacrament, and to bring the shocked Sisters to Marywood. From St. Adalbert’s came the offer of six classrooms for the last six weeks of school. Out of the rubble, life went on.

Another test of her mettle was more personal. While librarian at St. Mary Cathedral High School in Saginaw, Sister received word early one Sunday morning that her aging, widowed mother, Mrs. Edna Connolly, had given her life in the service of a companion during a fire that destroyed the dwelling they shared. Testimony of fire fighters indicated that Mrs. Connolly had been observed in safety on the ground floor, but had apparently gone to her friend’s aid on the second floor. The attempt was futile and fatal for both. With her brothers and sisters, Sister Thomas More accepted her mother’s last example of unselfish service as the greatest gift.

Hers was a happy life for the most part, admittedly not always pleasant, she said. At her Golden Jubilee in 1985 she wrote, “I have felt a kinship to the story of Joseph in the few unpleasant things that have happened to me, and I marvel at the good and happiness I would have missed had these misunderstandings not occurred.”

Like Joseph too, she wore a coat of many colors – her talents as teacher, librarian, and craft artist focused toward the crowning climax of religious education. For all these services of head and heart and hand, she was well prepared. Her B.A. degree and a Certificate of Theology were followed by an M.A. in Religious Education from Aquinas College, and a second M.A. in Library Science from Ball State University. Services in parish schools ranged largely across upper elementary grades and administration as well as high school. At Alpine, at Douglas St. Peter and at St. Mary’s Lake Leelanau, she was both superior and principal. At Gaylord St. Mary’s High School and Saginaw St. Mary’s, she was librarian.

In 1978, Sister began her final chapter of service as Director of Religious Education in Weare and adjacent Pentwater, only to close its doors after seventy-seven years of Dominican service. “Heart of gold,” they said of her – “she loved our outdoors, the woods, the first Mayflowers, the hills and streams – all made her feel close to God.” Nothing new. Coordinator, secretary, cook, cleaning lady, teacher, seamstress, and never too busy. That warm smile came in only “one size fits all” – generously BIG. Witness the countless orange-haired Raggedy Ann’s and Andy’s. Their simple origin appealed to her grassroots philosophical frugality – USE what God gives one to work with. She used what God gave her, ALL of it.

Sister’s final years of service in her beloved New Mexico were terminated by illness in 1989, when she returned home to Grand Rapids and Aquinata Hall. God called her to eternal home and himself on August 14, 1995.

We commend Sister Thomas More to your prayers.