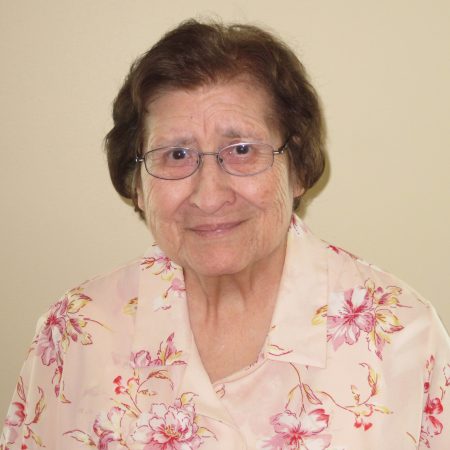 Born August 22, 1933 in San Marcos, Texas, Phyllis Lopez was one of nine children of Alejo and Socorro Barron Lopez who were natives of Mexico. Her father was a farm worker and so the family often moved in search of field work, although they soon settled on their own farm in Geronimo, Texas. Here, a favorite early memory of Phyllis’ was that of running through the plowed fields of their little farm.

The family continued to work in the fields moving back and forth to find work in Mississippi, Oklahoma and Wisconsin. While her mother, father and older children labored in the fields, Phyllis cared for the younger children. A childhood in a family of migrant workers gave Phyllis the ethic of hard work and the gift of fluency in both Spanish and English which proved invaluable in her future ministry with Hispanic people. By the time she was twelve, her father found work in a foundry in Saginaw, Michigan, and the family moved there.

Phyllis attended public schools and catechism classes when she was able to do so. It was here that she began to desire a closer union with God. “I think it was my parents’ good old-fashioned training that kept me just a little shy,” she reflected. Nonetheless, she was able to help her father in many ways. She assisted him in paying bills, ordering groceries, and writing letters. Her junior and senior years were at St. Joseph’s High School in Saginaw where she met the Dominican Sisters and attended a reception ceremony at Marywood.

This experience, along with the support and encouragement of the Sisters at St. Joseph’s Parish, led to her decision to apply to enter the congregation which she did on September 5, 1953. Just before entering, she and her mother visited Mexico.

At reception she received the name, Sister Guadalin and began her life as a Dominican Sister devoted to prayer, study, community and ministry. Inspired by her sister, the younger sibling, Mary, entered two years later and was given the name Sister Ellen Mary.

Although never robust in health and afflicted by an early onset hearing impairment, Sister Guadalin was determined to follow her quest for discipleship and began a series of ministries, the first of which was at St. John’s Home with the Religion Correspondence Office. She found it difficult to adjust to the fast pace but learned to love her work and the Sisters. She suffered a great deal from her loss of hearing yet was determined to do her best in whatever ministry was assigned to her.

In l960, Sr. Guadalin assisted in primary grades at St. Anthony, Fisherville, and then in 1961 began a five-year ministry at the School of Religion in Austin, Texas. Fatigue and ill health prompted a stay at Nazareth Hospital, first as a patient due to the need for rest and to learn coping skills such as lip reading for her severe hearing impairment. She then assisted for three years in the Occupational Therapy department at Nazareth. There she was commended for her kind, competent and caring ways with the patients.

In 1969, Sister Guadalin asked to return to the use of her baptismal name and hereafter was known as Sister Phyllis Lopez.

Following her years in Albuquerque, Sister Phyllis returned to her home town of Saginaw, Michigan and ministry in her family’s parish at St. Joseph’s. She flourished in ministry with Spanish-speaking adults. The following year she began a similar ministry with the parishioners of St. Joseph the Worker Parish in Grand Rapids.

Her interests were many: reading, listening to music, singing, painting, crafts, volleyball, bike riding, sight-seeing, poetry, dance, and especially drama. She enjoyed acting in parish and school productions whenever the opportunity presented itself.

“Most important to me are: scripture, results of Vatican II, my growth as a person, the support and interest of the sisters in my community and the opportunity to be able to choose further study and development.”

Her life was summed up in a letter of recommendation by a pastor at Holy Ghost Parish in Albuquerque: “Everyone loved Sr. Phyllis. She quietly, dutifully and lovingly cared for the special needs of our senior citizens. She visited and prayed with the elderly who were homebound . . . [she] went out of her way to add a personal touch of love for birthdays and other special celebrations with her beautiful cards . . . she was a source of unity, peace, joy and love.”

Pray for immigrants and peace with neighbors

Our Lady of Guadalupe Parish

Sister Phyllis with the choir group of Our Lady of Guadalupe Parish of Bay City, Michigan