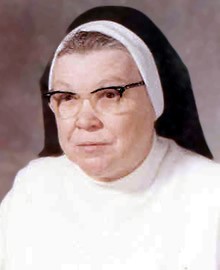 St. Paul's words to his beloved Philippian Christians so aptly describe the “driving force” for these and all the years of Sister Norena's rich and dedicated life, “It is God who is at work within you, giving you the will and the power to achieve God's purpose.” (2:13)

When Sister Norena Downes’s earthly life ended, the Grand Rapids Dominicans lost a great missionary, Sister was one of the early pioneer Sisters to go to the missions in New Mexico. Thirty-six years of her religious life were spent working in the Southwest.

Sister Norena’s earthly life began in Parnell, Michigan on November 21, 1903, when she was born to Garrett and Johanna Downes. She was the oldest of a family of five children, three girls and two boys. Sister Norena never let anyone forget that she was Irish and her parents were fine Irish Catholics with a deep faith. It was at St. Patrick Church in Parnell on December 6, 1903 that she was baptized and given the name of Margaret Mary. She was confirmed by the Most Reverend H. J. Richter on November 1, 1913.

Margaret Mary’s grammar school was in the local public schools and for grade nine she attended St. Patrick School at Parnell taught by the Mercy Sisters. Early in life she was afflicted with an acute sinus condition which never left her, and when her uncle, Father F. X. Downes, the pastor of St. Mary, Lake Leelanau, invited her to attend St. Mary High School, hoping this would improve her health, she accepted his offer. Here she was taught by our own Sisters.

Lake Leelanau was not Margaret Mary’s first contact with our Sisters. She became acquainted with the “orphan Sisters” at a very early age when in the fall her father helped drive Sisters through the parish to collect food for the orphans at St. John Home. Then, too, our Sister Lillian Kaminska had been “adopted” by the Downes family and when she made her Profession of Vows in our Community, Margaret Mary attended the ceremony and was impressed with the idea that she, too, should consider the religious vocation. It was, however, while attending St. Mary, Lake Leelanau that she became more aware of her religious vocation and decided to enter in the near future.

On the Feast of Our Lady’s Nativity, September 8, 1922 Margaret Mary became a member of the last class of postulants to enter the novitiate at St. John Home. On the first Friday of October the grand exodus from St. John Home to the new Marywood Motherhouse became Dominican history. On March 7, 1923, the Feast of our Dominican brother, St. Thomas, she received the habit from Mother Benedicta O’Rourke and the name of Sister Norena of St. Joseph. Mother Benedicta received Sister Norena’s First Profession of Vows on August 18, 1925.

As a second year novice Sister Norena began her educational ministry which was to encompass fifty-five years of her religious life. In the course of those years she was an elementary and secondary teacher, administrator, superior, librarian, and a religious education director. Her first assignment was at Chesaning and at that time a doctor recommended that Sister should go to a warm climate in the West.

In April of 1925 Father Peter Kuppers, the pastor of Penasco, New Mexico (with thirteen missions under his care) came to Marywood accompanied by the faithful Indian Chief, Manuel of Picuris Pueblo, New Mexico (dressed in full regalia) asking Mother Benedicta and her Council to send our Sisters to the Southwest. This they did in July 1925. Thus began the staffing of several missions in the Southwest. In 1926 Sister Norena was asked to join the pioneers at Dixon. St. Paul’s journeys and zeal were emulated by Sister Norena. Her thirty-six years in New Mexico took her up and down New Mexico to Dixon, Penasco, Belen, San Juan, Santa Cruz, and in Albuquerque, to Our Lady of Fatima, San Ignacio, and the Religious Education Office.

During Sister Norena’s fifty-five years in education, she did make intermittent “touch downs” in Michigan. With the exception of her eleven years at Catholic Central, Grand Rapids there were one-year or two-year assignments at Chesaning; Alpine; Carson City; Wright; Catholic Central, Muskegon; Muskegon H eights; and Melvindale.

Sister Norena’s happiest and healthiest years were those in New Mexico. She loved the Spanish and Indian people and her ministry to the poor was untiring. She derived much pleasure from the Spanish and Indian customs and a number of these are related in the mission annals of the years Sister Norena was in Mexico. The following are but a few of those cited: 400 noisy babies Confirmed; the choosing of the Padrino and Madrina for Christ Child at Christmas; the Indian dance at Christmas; and at every Gloria Patri at Vespers on Christmas Eve, firing a shot in the air and tom-toms beating furiously; the Indians ringing the Church bell all day on November 1 to remind the faithful to pray for the departed.

According to the Sisters’ letters, the early days in New Mexico were filled with many hardships: “in 1936 water came through the pipes for the first time”; “1945 the school was equipped with electric lights”; “crowded classrooms of 70 and ‘still growing”‘; “instructing the children on the mission in Christian Doctrine on Saturdays and Sundays and every night after school”. During the first decades the Sisters never returned to Michigan for a funeral, and the home visits were few and far between.

Sister Norena did many wonderful things in New Mexico. Two of special note were her getting the Catholic Extension Society interested in the needs of the schools and churches in New Mexico, and in the 1970’s her setting up a scholarship fund so that students could attend a Catholic school.

Only a prayerful woman full of energy and enthusiasm could so joyously live such a rich and dedicated life as was Sister Norena’s. Fittingly it was in New Mexico that Sister Norena participated in some significant events. On April 1, 1973, her Golden Jubilee was celebrated with a beautiful Liturgy followed by a reception. On April 13, 1975, she was a part of the magnificent Golden Jubilee celebration of our Sisters in New Mexico. Both of these events were held at Santa Cruz. In 1978 she was the recipient of a Certificate of Appreciation for her thirty-five years of dedicated work in the Archdiocese of Santa Fe.

When Sister Norena terminated her work in New Mexico in 1979, she came to Marywood and resided here for five years. Because of failing health, her residence became Aquinata Hall in June 1984. Here as much as possible, she continued her warm interest in others and her devotedness to her prayer life. Community life for Sister Norena was always of the utmost importance.

We thank God for Sister Norena’s long and full life, and for her hard, indefatigable work that brought God’s love and faith to so many, especially to the poor. Surely these words of a hymn very dear to our Sisters in New Mexico are most appropriate: “Sing to the mountains, sing to the sea. Raise your voices, lift your hearts. This is the day the Lord has made. Let all the earth rejoice.”

Sister Norena is survived by her sister, Mrs. Gertrude Kelly; her sister-in-law, Mrs. Leona Downes, both of Grand Rapids, and several cousins, nieces, nephews and many friends.

We commend Sister Norena to your prayers.