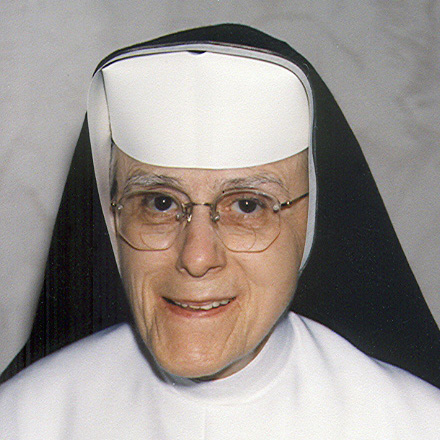 Throughout her life Sister Mary Edward Plamondon remained steadfast to the religious practices of her early years and with these she carved out her personal life style in her later years. She was born in Lake Leelanau on August 19, 1923 to Raymond and Catherine Kolarik Plamondon. In their family of eight girls and one boy she was the seventh girl. She was baptized Rose Mary Cecelia.

Her mother had for years served as sacristan in the parish church and at the age of 10 Rose Mary began helping in the care of the altars. Her education, grades 1-12, was by Dominicans at St. Mary’s, Lake Leelanau. After graduating in 1941, she stayed at home, helped her parents, did book work and sacristy work for her pastor, Fr. Neubecker, and assisted older townspeople.

In February, 1943, Rose Mary entered the congregation at Marywood. “My postulate days with Sister Mary Leonora were very, very, happy ones.” In September 1943, she received the habit and the name Sister Mary Edward of the Eucharistic Heart of Jesus. Her college education was through Aquinas and correspondence classes from several other colleges.

“When I entered I told Mother Euphrasia I would do anything else but teach, but that was the first job I was given, and I have loved and enjoyed it right from the beginning. . . I have learned much from my little ones under my care, and I loved each one dearly. I have been teaching first or second graders most of my teaching days. I have enjoyed every class I have had. First Communion classes every year. I will never forget any of them in my prayers.”

Sister Mary Edward’s teaching assignments were at St. Anne’s, Alpena; St. Alphonsus, St. Andrew, Blessed Sacrament, St. Anthony, Grand Rapids; Our Lady of the Lake, Prudenville; St. Mary, Gaylord; and St. Mary, Lake Leelanau, where she was principal for four years. “I could never have handled the large classes I had alone. In the classroom I am just His instrument.” When she taught in Gaylord, the school burned and a picture in the local newspaper showed her leading her first graders to safety. There she also became a good friend of Edmund C. Szoka, the first bishop of Gaylord and later Archbishop of Detroit and a cardinal.

Beginning in 1983, Sister Mary Edward lived in her home parish in Lake Leelanau. She went there to care for her ailing mother, who died at the age of 100, and then she stayed there to care for her sister. She remained as a volunteer parish ministry worker, serving as a home visitor, sacristan and pastor’s assistant in numerous capacities. One of her contributions was to find sacramental records needed by a neighboring parish. In spite of poor health, she continued to raise a garden and preserve foods. She was most hospitable to Sisters who visited her.

The peak experience of Sister Mary Edward’s life came in the spring of the Jubilee year 2000. Hearing two couples from the parish planning a trip to Rome, she told them, “I wished I could crawl in their suitcase.” They solicited help from her friends and relatives and weeks later approached her in the sacristy to ask if she would like to go with them. Before replying, she asked the pastor (Fr, Jerry Hunko) for permission and he said, “of course.” Sister and her friends were given hospitality in a convent of the Sisters of St. Dorothea.

Cardinal Szoka had promised to arrange an audience with the Pope if she ever had a chance to go to Rome. He did, and Sister Mary Edward was 18th in line on the steps of St. Peter’s Basilica. “When I got up to him I said, ‘Holy Father, I love you with all my heart.” Pope John Paul said nothing with his voice but “he said everything with his eyes and his smile.” Later the Leelanau Enterprise carried a picture of the Pope patting Sister Mary Edward’s cheek as she knelt before him.

Sister Mary Edward is survived by her brother Raymond (Cathy) Plamondon of Traverse City and her sister Dorothy Chimoski of Suttons Bay; nieces, nephews, friends and Sisters in her Dominican Community.

We commend Sister Mary Edward to your prayers