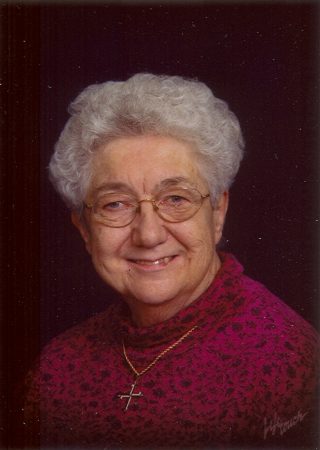 We know that all things work together for good for those who love God. Rom. 8:28

This verse expresses the warm belief of Sister Mary Ann Cudzanowski, whose service in our Grand Rapids Dominican Congregation included many “things” and much “working together.”

Mary Ann was born in Grand Rapids on November 13, 1932, the youngest child and only girl of four siblings. Her parents, Vincent and Magdelena Uzolin Cudzanowski, immigrated to the United States from Poland. They met and married in the United States. She was very close to her parents and older brothers.

Mary Ann attended St. Adalbert’s School through Grade 10. Her junior and senior years of high school were at Grand Rapids Catholic Central; classes were held in the same St. Adalbert’s building while construction on the downtown CCHS building addition was completed. At Catholic Central she came to know the Grand Rapids Dominicans in the classroom. She also knew the Sisters in less formal situations when at the age of 15 she did odd jobs at the Aquinas College convent and college women’s residence on Library Street.

Several years later, after connecting with the Sisters at St. John’s Home, Mary Ann asked Sister Lucille Leannah “how do you get to Marywood?” After driving directions were given…she quickly amended her inquiry to make it clear she was asking how to enter the Congregation! In 1955 Mary Ann entered the Congregation and the following year received the Dominican habit and the name Sister Mary Ralph of the Immaculate Conception, which she kept until returning to her baptismal name in 1969.

For eight years Sister Ralph was in charge of the Marywood laundry. She was known as a capable, organized and conscientious worker. Another key ministry assignment was chauffeur for Mother Victor. Tales at the luncheon table at Ratisbon in later years would entertain many – with appropriate decorum, of course! She was a valued companion on many trips of short and long duration.

Then in 1961 Sister Mary Ann began to operate the Congregation’s multilith printing press in a small workroom in the East Wing. Later the Graphic Arts Department was moved to the ground floor which provided more space, light, and convenience. This was another very busy ministry! A careful worker, she kept the press in such good condition that it outlasted all expectations. In addition to printing and organizing Congregational mailings, she printed greeting cards for all occasions, some designed by Sister Rosalia Genovese and some of her own design.

Eventually the press was given to a small local print shop. With printing duties shifted to computer and outsourced modes, Sister Mary Ann next mastered the mail meter and continued as director of mailing. She had many co-workers who assisted in sorting and assembling materials and delivering the mail on the Marywood campus. She enjoyed her work, except when it had to be done in a rush and quality gave way to quantity – it was important to her that all be done right! She treated her co-workers with great respect and showed her gratitude for their service by treating them to lunch on occasion.

Sister Mary Ann was a woman of few words and she was dedicated to her ministry. Her favorite pastimes were fishing, swimming, bingo, traveling –she visited 48 states and five foreign countries — and — would you believe? – car maintenance and repairing televisions. She loved her family, was proud of having big brothers, and enjoyed connecting with friends. For years she and Sister Rose Seraphine enjoyed a nightly game of Aggravation (the name of the game, not their experience of it!).

Sister Mary Ann’s message at the time of her Golden Jubilee was “T.E.A.M. –Together Everyone Accomplishes More.” She thanked all who had helped her reach that moment “to give glory to God ‘Usque ad Mortem.’”

Sister Mary Ann is survived by nieces and nephews, many friends and members of her Dominican community.

We commend Sister Mary Ann to your prayers.