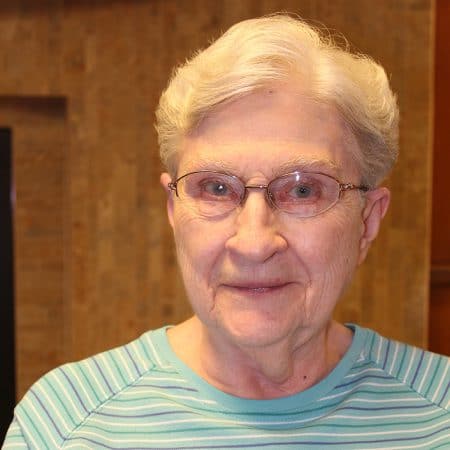 “Persistent nudges of grace guiding the inward journey to gratitude and freedom.”

The Edwards family welcomed their first born, Marlene, on January 2, 1933 in Madison, Wisconsin. Her mother, Loretta Gill, came from a large Irish-Catholic family descended from John Gill, a 17th century settler in Maine. William Henry Edwards, Marlene’s father, was a member of the Army Reserve Corps which necessitated eight moves by the time Marlene was in eighth grade.

In spite of all these moves, Marlene’s mother made sure she attended Catholic schools wherever they were located: Muskegon, Michigan; Atlanta, Georgia; and Madison, Wisconsin. Until the age of fourteen, when her sister was born, Marlene as an only child became, in her own words, “independent, responsible, self-willed, and socially inept.”

Marlene first considered religious life when she was a fourth grader. Her mother’s extended family included a Dominican aunt, a first cousin who was a monsignor, and other cousins who were Jesuits. Marlene attended high school at St. Mary, Muskegon, where her teachers were Grand Rapids Dominicans. At the age of 17 she joined the Dominican Sisters at Marywood.

The prayer schedule in religious life was a challenge for Sister Marlene. In her own words: “I am a night person and do not function at all well in the early morning. I came to rely heavily on my own ideas and developed skills at getting my own way.” After Vatican II, the prayer schedule changed, lending itself more amenable for Marlene’s rhythm. Over time she became aware of how much God loved her even when she did not know it.

Sister Marlene received a B.A. and M.A. in Religious Education from Aquinas College and an M.A. in Elementary Administration from Central Michigan University.

In a reflection, Sister Marlene related a pivotal moment in her life. “In 1970 I accidentally signed up for a Charismatic Retreat at our motherhouse. (God’s ‘accidents’ have been good for me!) My prayer life opened up and I learned to praise, to focus, to discern, and to listen.” Later, at the age of 62, she met a spiritual director who helped her know the gift of God’s love, mercy, compassion, and healing. “My heart has changed. I am less of a head person and more of a heart person now. . . I hunger for a deeper relationship with my Lord.”

Sister Marlene was able to help care for her aging mother, who had moved to her sister’s home in Texas, and both daughters were present when their mother died, soon after Christmas in 1996. This period with her mother was a great blessing for Sister Marlene as it gave her time to reflect on the events of her early life at home.

Sister Marlene enjoyed a sabbatical year for study and personal growth in 1999. She designed a year of renewal through travel, prayer, holistic health, educational opportunities, and service. Through this year and subsequent retreat opportunities, she grew in self-knowledge, awareness, and a deeper prayer life.

After retiring from full-time ministry, Sister Marlene resided at Marywood, where she assisted the house administrator and coordinated religious education at St. Dominic Parish. She also served as spiritual director and referral coordinator for Dominican Center at Marywood, and for several years was a member of the Common Life Team.

Sister Marlene enjoyed travel, reading, and sewing. She was a fine artist and writer. She enjoyed science and cooking as well.

At the time of her golden jubilee (2001) she wrote: “Celebrate with me the many graces and blessings that God has bestowed on me. My Sisters, family, my friends, know that you have been, and are, the greatest gift of all. As my life journey continues you give me hope. Be assured that my gratitude continues.”

Sr. Marlene is survived by her sister Cheryl (James) Burzynski; nephews, many friends and members of her Dominican Community.

We commend Sister Marlene to your prayers.

Pray for the aged, especially priests and Sisters

Throughout the year, the Dominican Sisters stuff, sew, and create dolls for children at Bethany Christian Services – an activity that Sr. Marlene was often happy to help with.