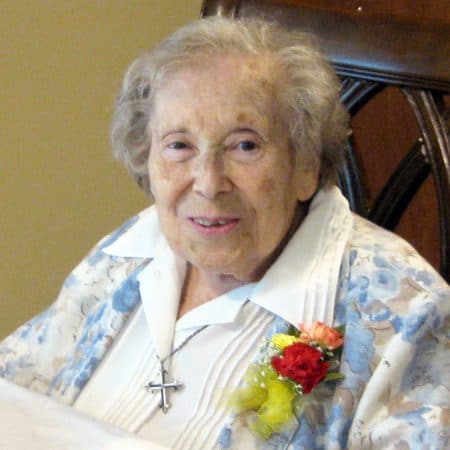 Sister Marie Bernarde’s first desire to become a religious came from watching a sacristan lighting candles and working around the altar. Once she became a Dominican Sister, she lit many candles and the Gospel message to be a “light for the world” became a daily prayer.

Maria Bernadita Salazar was born January 9, 1927 in Espanola, New Mexico. The third of ten children of Henry and Adelaide Lucero Salazar, she attended the local elementary and high school, graduating in 1944. Greatly interested in doing secretarial work, she passed a Civil Service Clerical Exam. Following that achievement, she enjoyed working as secretary to the County Extension Agent in Rio Arriba.

Her acquaintance with the Grand Rapids Dominicans had come through attending Mass at Santa Cruz. With the encouragement of her parents and prayer on her own part, she approached Sister Seraphine Wendling for an interview and decided to enter the congregation in September 1945. At reception she took a French form of her baptismal name. She made her first vows in March 1947, and the following fall was assigned to teach.

For thirty-two years Sister Marie Bernarde taught in grades K through 5 as well as religion in Grades K through 8. The schools were all in Michigan: St. Thomas, Grand Rapids; Mt. Carmel, Saginaw; St. Andrew, Grand Rapids; Our Lady of Perpetual Help, Chesaning; and Blessed Sacrament, Grand Rapids where she became director of children’s liturgy and coordinator of religious education. She also worked in sacramental preparation programs for Baptism, First Eucharist, and Reconciliation. In addition, she taught conversational Spanish in the elementary grades.

Her professional background includes a BA degree from Aquinas College; courses in Childhood Education from the National College of Education in Evanston, Illinois; work in Learning Disabilities at Calvin College; and workshops in Pastoral Ministry at Notre Dame and John Carroll Universities.

In 1979, Sister Marie Bernarde became Pastoral Associate of Liturgy for Family and School at Sacred Heart Parish, Grand Rapids. There she lived with the School Sisters of Notre Dame. She enjoyed singing the praises of the Lord as a choir member, cantor, lector, and lay minister of the Eucharist. She also visited the sick in the hospital and the lonely in their homes. One of her particularly appreciated gifts was that of providing comfort and support for grieving families at the time of the death of their loved ones. In 2009 she moved to Marywood Health Center due to failing health.

“What has meant most to me in my Dominican vocation is my giftedness in being able to reach out and touch the hearts of the very young as well as the elderly and ill of the parish . . . I also love my Dominican community for their support, love and concern experienced in every aspect of my religious life.” Sister Marie Bernarde lit many candles both on altars and in the hearts of those she served. She will be missed by family, friends and community members.

We commend Sister Marie Bernarde to your prayers.