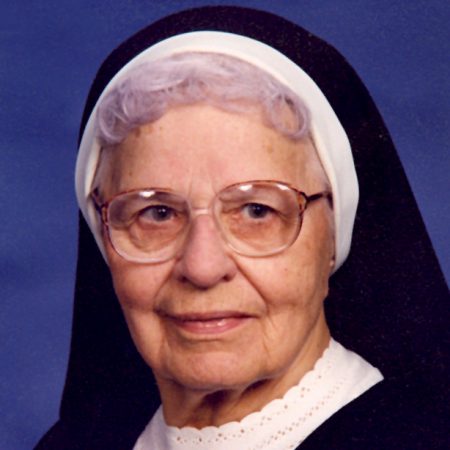 In his epistle Saint James states, “Once she has been proved, she will receive the crown of eternal life.” (1:12-13).

That crown of eternal life was bestowed on Sister Marciana on December 12, 2010 after decades of fidelity and service as well as no small amount of travail. Sister Marciana’s life was one of exemplary perseverance and faith, hope, and love.

She was born in Grand Rapids on March 8, 1916 to Alexander and Marcyanna (Lenda) Danielski who were both born in Poland. Sister was proud of her Polish heritage. The Danielski family was blessed with nine children, four boys and five girls. She was the fifth oldest member. She was baptized at Sacred Heart Church, Grand Rapids on March 12, 1916, and given the name of Estelle Constance. Estelle attended Sacred Heart School where she was taught by the Notre Dame Sisters. She also attended Davis Tech High School.

The Danielski family experienced its first great sorrow when Estelle was only ten years old. Her mother died unexpectedly of a massive coronary leaving nine children ranging in age from nine months to eighteen years. Just eighteen months after their mother’s death, their father died. The children were determined to stay together, and this they did with the oldest brother taking on the role of the father of the family. Estelle, as the second oldest girl, began to manage the household responsibilities.

Relatives offered to help them, but the family of nine resolved to live their lives together. Of this period Sister Marciana wrote, “We children struggled through the years beginning with the Depression but managed to stay together. When the youngest sister was married, I prayed for guidance as to what I was to do with my life. After much prayer, I was inspired to join the Dominicans at the age of thirty-two.” Estelle was attracted to the Dominican white habit and the location of the Motherhouse that was near her home.

On September 8, 1948 Estelle entered Marywood. Sister Leonora Gallagher was her postulant mistress. On June 1, 1949 she was received into the community and given the name of Sister Marciana of Christ the King. Her First Profession of Vows was made to Mother Victor Flannery on June 5, 1950.

With the exception of one year as prefect of the boys at Holy Rosary Academy, her work was in Food Service to which she devoted forty years. She took great satisfaction in serving well-balanced, delicious, and attractive meals. The Sisters were always welcome in her kitchen. Her assignments were to St. John, Essexville; Holy Rosary Academy, Bay City; St. Stephen, St. Joseph Seminary, St. Alphonsus, Marywood, and the House of Studies in Grand Rapids.

Sister Marciana was grateful to be missioned in Grand Rapids because her family continued to need her support, help and wisdom. When her youngest sister died of a massive coronary at thirty-nine, six children including a six-month old infant were left motherless. For three years, Sister Marciana went to her brother-in-law’s house on her days off to wash, iron, cook and clean. After her brother-in-law remarried, she devoted any free time to her Aunt Alida, 87, who lived alone. She also devoted much time to her oldest brother and sister-in-law who were incapacitated.

Seeing Sister Marciana board the city bus on her free days was a familiar sight to those living around Marywood. While St. Dominic traveled on foot as he ministered to others, Sr. Marciana’s age and modern conveniences qualified her to travel by bus.

Sister’s help to others, however, was not limited to her own family. While stationed at St. Alphonsus and Marywood, she was engaged in several outside ministries, particularly in visiting the elderly in the neighborhood and the sick in nursing homes and hospitals.

In 1992 Sister Marciana discontinued her work in Food Service and devoted her time to a ministry to which she was no stranger. She visited the Sisters at Aquinata Hall and took them out for rides in their wheelchairs. She also helped in the print shop.

But life wasn’t all work for Sister Marciana. She was an avid and prolific reader. She enjoyed traveling, listening to good music, operettas, gardening, walking, swimming, crocheting, watching a sunset and enjoying the beauty of nature. In community life she was grateful for being able to assist at Holy Mass, to pray the Office, and participate in activities with the other Sisters. Her prayer life meant much to her.

When asked what her favorite saying was she responded, “Do unto others as you would want done unto yourself.” She practiced this to the nth degree. And now we know that all of the good works of generous service and heartfelt prayer that permeated so much of Sister Marciana’s life will be returned to her a hundredfold. The world is a better place for her having been here for 94 years. St. Paul surely had Sister Marciana in mind when he said: “We are truly God’s handiwork created in Christ Jesus to lead the life of good works” (Eph 2:10).

Sister Marciana, “May the angels welcome you to Paradise, may the martyrs greet you on your way, may you see the face of the Lord this day.” Alleluia!

We commend Sister Marciana to your prayers.

Sister Marciana on the left with a friend in 1947

Sister Marciana with her biological sister Rose Danielski in 1982

Preparing some green peppers for dinner