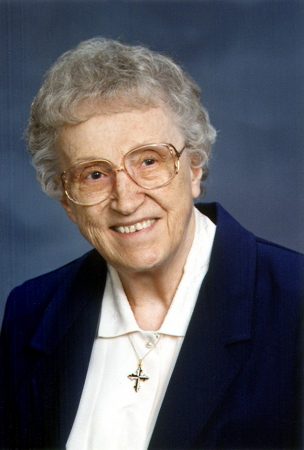 
“Prepare the way of the Lord, make straight his paths” Matthew 3:3

This Advent prophecy was Sister Malvena’s favorite Scripture passage, and what depth of meaning it contained! For Sister it served not only as a principle on which to build her own life, but also as a constant inspiration and impetus in her many years of teaching ministry. Now it is God who has prepared the welcome home to heaven for Sister Malvena. Her years of being God’s faithful disciple are now complete, and ALLELUIA is her song of resurrection joy!

Life for Malvena began in Lampman, Saskatchewan, Canada on July 5, 1917, when she became the eleventh of twelve children, four boys and eight girls, born to Venance and Emma La Charite Nadon. Their parish church was Our Lady of the Seven Dolors, and here she was baptized on July 28, 1917, made her First Holy Communion in 1925, and was confirmed on July 25, 1926. At Baptism she was christened Malvena Marie.

The Nadon home was an exemplary Christian one. Weekly reading of Scripture (in French) and the daily family Rosary were two common practices for this family. Malvena remembered well her father’s admonitions: “All have a role to fulfill in this life and God will always help us fulfill it if we let Him do so.” Another frequent saying of her father was, “A quitter never wins and a winner never quits.” These two beliefs sustained Sister throughout her life.

Two of Malvena’s sisters were also called to religious life, albeit in two different congregations. Sister Amanda was a Misericordia Sister and Sister Alice was a Sister of the Little Missionaries of St. Joseph. She became acquainted with the Dominican Sisters of Grand Rapids through summertime catechism programs where she met Sisters Athanasius Chartier, Anna Plamondon, and Dominic Marie Plamondon.

When Malvena finished the tenth grade in Lampman Public School, she indicated a desire for a deepening of her faith through a Catholic education. So it was that in 1934 in her junior year, she came to Marywood as an aspirant under Sister Edith Welzel’s loving and prudent guidance. On September 6, 1936 she entered the postulancy. On March 9, 1937, Malvena received the habit of St. Dominic and the name of Sister Mary Armand of the Sacred Heart. Mother Euphrasia Sullivan was the Prioress General, both at the time of her Reception and for her First Profession of Vows on March 10, 1938. After Vatican II she chose to return to her baptismal name Malvena.

Sister Malvena was passionate about the benefits of a Catholic education for all children, especially those most in need. She spent most of her religious life happily teaching at a variety of grade levels. She taught all the grades from one to twelve, most often in high school in the areas of social studies, English and religious education. She taught in Grand Rapids, Muskegon, Saginaw, Bay City, Traverse City and at Bishop Borgess High School in Detroit. She also taught in New Mexico at San Juan and Belen. During some of these years she also served in school administration.

She was a much loved and excellent teacher. When she was teaching at Catholic Central, Grand Rapids, Aquinas College introduced programs toward a master’s degree. Sister took advantage of late afternoon, evening, and summer classes to earn her M.A. in Social Studies.

One of her favorite experiences occurred while teaching at Catholic Central in Muskegon. As head of the Social Studies Department, she was involved in a four-year summer program for college bound students. The program was sponsored by the Foreign Study League from Salt Lake City, Utah. It was entitled Comparative Governments in Six European Countries. It required that students thoroughly study geographic origins, cultures and governments and how they contributed to our present civilization. The Foreign Study League provided study materials and audio equipment. It was Sister Malvena’s responsibility to teach and prepare the students and their parents for these educational tours which took place in the summer. Sister Malvena gave her ALL! It was a gratifying success. The enthusiasm and concerted efforts of the students and their parents made the project her most pleasurable, educational experience. Sister Malvena was always delighted to recall and share these happy memories with others.

As a faithful Dominican she loved common prayer and community life. Always a vivacious person with a sense of humor, she enhanced life for others. She had many varied interests, was an excellent seamstress and an avid reader. She was an energetic sports fan, especially for hockey, horse racing, and Tiger baseball.

At the time of her Golden Jubilee in 1987, Sister Malvena expressed her gratitude to her family and the Dominican Sisters who had been instrumental in enriching her spiritual life. She was ever grateful to have been a member of a large, loving, and supportive family and she continued to experience those same values in her Dominican Family. Important in her life was the opportunity to witness and share her faith through her prayer life and service to the many to whom she ministered.

May Sister Malvena now rest in God’s eternal peace, love, and joy. May she intercede for us that we remain faithful to furthering God’s Kingdom here on earth as she did throughout her life.

We commend Sister Malvena to your prayers.